Anders Lonne Gronseth: Theory Of Anything

By DAN MCCLENAGHAN
August 25, 2019
Sign in to view read count 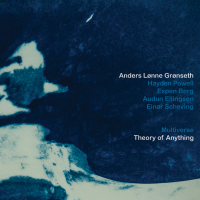 2018 saw the release of the eponymous debut of Norwegian reedman Anders Lonne Gronseth's quintet, Multiverse (Pling Music). 2019 opened the door to Theory Of Anything, music recorded by the group at the same session. The sound is Nordic cool and patient in its unfolding, with Gronseth's compositions leaving the doors wide open to spontaneity and interaction.

The music is largely improvised, but it doesn't sound so. Motifs congeal, and a patient cerebralism pervades. This is the same lineup—trumpet and reed, with a rhythm section—which alto saxophonist Charlie Parker used to change jazz, but it is a long way from the ground-breaking, often frenetic bebop sound of the Yardbird. Indeed, the first three tunes, "String Landscape," "Theory Of Anything" and "Alternative Timelines (When Henry Met Erik)" could be taken for a soundtrack of the movement of a nearby galaxy, perceived—duo to its distance—to move at a glacial and majestic pace, with the spontaneous arrangements forming themselves into a sound that feels fully composed.

The fourth tune, "Inflation," takes things into another universe, with a brash horn opening that slips into juiced-up Miles Davis Sketches Of Spain (Columbia, 1960) mood, in part from the danceable rhythm-section work (somebody break out the castanets), in part due to Hayden Powell's brassy, meet-you-at-the-bullfight trumpet. "Modal Realism" leads things back to a dreamier state, beginning with pianist Espen Berg's dark and extended opening glissando, with Grosneth joining him on a wandering soprano sax a couple of minutes in.

"Dimensional Planes" takes things back to the beautifully gorgeous "movement of the universe" sound, with Gronseth's bass clarinet taking the part of the voice of God; the galaxy spins with the perceived speed of the minute hand of the clock; then Hayden Powell's trumpet creates a glowing nebula, and gravity goes to work initiating the beginnings of the congealing of stars.