By Samuel Chell
February 21, 2007
Sign in to view read count 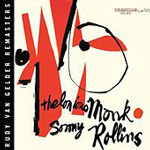 Since a 50th Anniversary edition of this recording was released only several years ago, it's possible that this recent RVG edition was seen by the parent company, Concord, as an opportunity to capitalize on the success—critical and popular—of the Monk/Coltrane Carnegie Hall concert (Blue Note, 2005). Regardless, this early meeting of masters, while yielding music of undeniable historical significance and timeless interest, is no match for the later one.

To begin with, the title is deceptive. Rollins and Monk play together on three of the five tracks on the album, which comprises three separate sessions recorded between November 1953 and September 1954. On the opening "Way You Look Tonight Monk's solo is a mere half chorus—played in a fairly conventional bebop style. This leaves but two tunes, "I Want to Be Happy and "Friday the 13th, on which the two strong musical personalities seek to negotiate a happy result.

The proceedings are enjoyable, frequently original and illuminating, but not as miraculous as some reviews of earlier editions have suggested. It's instructive to hear the "real" Monk emerge on "Happy," allowing the beat to establish itself before he plays off of and around it, making the piano another polyrhythmic, percussive voice—as opposed to a solo voice accompanied by rhythm section or simply another member of the accompanying team itself.

The individualist/pianist solos for three choruses, each discretely original in conception and execution. After a chorus of connected, seamless lines played in the middle register, he leaps to the upper register for the second chorus, jabbing dissonant chord clusters at irregular intervals in the unfilled space. The third chorus finds him relinquishing his left hand to its independent devices while maintaining an elliptical melody in the right. Always an authoritative solo voice, Rollins seems emboldened by Monk's example, playing with unmistakable conviction, especially compared to his work on an earlier session like Miles Davis' Diggin' (Prestige, 1951), where the tenorist clearly was aiming to make an impression.

Still, after hearing the Monk/Coltrane concert this encounter is inescapably anticlimactic. Rollins, whose playing anticipates some of the melodic/rhythmic characteristics of his successor Charlie Rouse, lacks the light articulations and responsive quickness of the less-renowned player. Compared to Rouse's sportive playfulness, the tenor colossus sounds somewhat heavy and ponderous in Monk country. On the other hand, Coltrane's intensity meshes with Monk's whimsy because the piano "grounds the rapturous, altissimo flights of the tenor saxophone, as though Monk's insistent harmonies and unyielding time are the falconer around which the falcon's gyres are free to expend themselves without spiraling out of control.

Julius Watkins adds his solo voice for Monk's extended and challenging (certainly for the listener) four-bar composition, "Friday the 13th, and the album is rounded out by the two trio numbers which, though they include Blakey, aren't the equal of the later dialog between the pianist and the percussionist on Art Blakey's Jazz Messengers with Thelonious Monk (Atlantic, 1957)—a fascinating and lively, yet ultimately one-sided conversation that might just as well have been titled "The Thelonious Monk Quintet."

The Way You Look Tonight; I Want To Be Happy; Work; Nutty; Friday the 13th.