By STUART BROOMER
January 18, 2009
Sign in to view read count 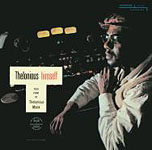 When producer Orrin Keepnews undertook this album for Riverside in 1957, Thelonious Monk had recorded relatively little as a solo pianist—nine tracks for French Vogue in 1954 and single tracks on Prestige and Riverside LPs. While the Vogue had emphasized Monk's originals and the single tracks were all old tunes, Thelonious Himself (Riverside/OJC, 1957) balanced his unique approach to standards with striking performances of originals. Whether fragmented, dissonant or oddly hesitant, Monk's probing (the usage is literal, heard in the repeated arpeggio that opens the alternate Take 1 of "I Should Care") into standards were often stunning adventures in a glacier-slow version of stride and a deliberateness that were downright sculptural.

Here he does it to five tunes, including "April in Paris" and "I Should Care." The originals include the stunning "Functional," nine minutes of blues that Monk himself found reminiscent of James P. Johnson and which is captured here in two superb versions; a darkly moody summoning of "Round Midnight," with Monk somehow encrypting his most famous tune and strangest of all, the closing "Monk's Mood," for which Monk required the presence of Wilbur Ware on bass and John Coltrane on tenor for a very odd trio recording. Like the contemporaneous "Brilliant Corners," it gives some sense of Monk's unerring and genuinely weird, sense of form, as if a fraternity of geniuses has appeared to give closure to the ceremony.

Monk's later recordings for Columbia tended to mellow and round off the eccentric (and yes, "brilliant") corners of his music, but the Riverside years from 1955-60 continuously embody his greatest performances and explain why people kept calling his approach "angular." He was a self-conscious artist and the quintessential modernist.

Monk's solo performances can inspire a certain fanatical devotion. One of my favorites is "Chordially," ten minutes of Monk warming up on a very late recording, The London Sessions, Volume Three (Black Lion), his pensive, reflective chords accompanied by the click of untrimmed nails on the keyboard. In that spirit, here are the details about the available versions of Thelonious Himself, created by overlapping reissue programs. This edition has superb sound (now so intense you can feel the uncanny Monk-ian atmosphere of deliberation, hesitation and randomness in the very air) and Keepnews' remarkable reminiscences about the original sessions for Riverside. Missing is Keepnews' edit of all of Monk's studio ruminations on "Round Midnight" into a 21-minute epic. It's available on the Complete Riverside Recordings and the previous single-disc reissues, including the 20bit K2 SuperCoding JVC version, which lacked the other alternate takes.

April in Paris; (I Don