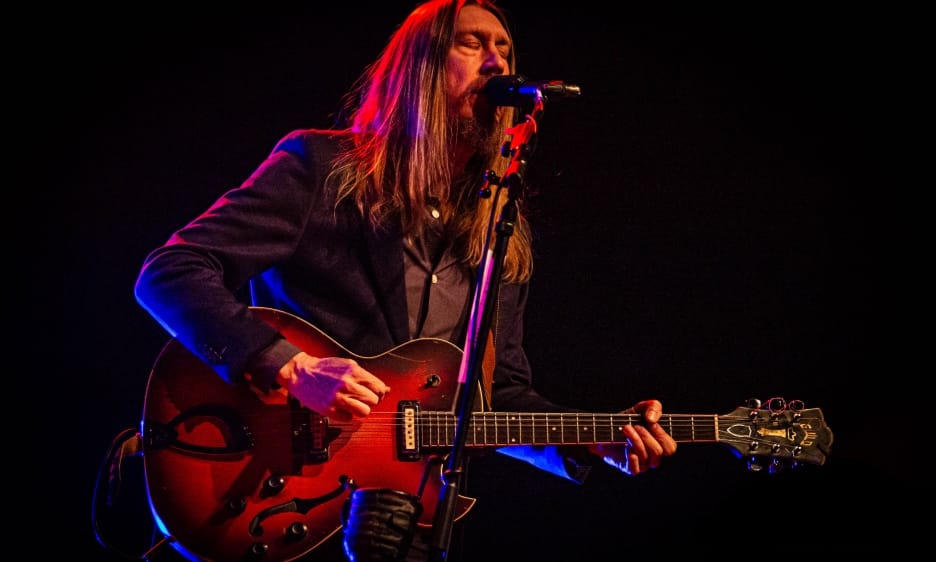 By DOUG COLLETTE
February 15, 2020
Sign in to view read count
The Wood Brothers
The Flynn Center for the Performing Arts
Burlington, VT
February 6, 2020

It was only poetic justice for The Wood Brothers to headline their own show at The Flynn Center on February 6 2020. And not just because in 2009, they won over the audience in this venerable venue opening for Bruce Hornsby. One of the most varied sets the Woods have ever played in their decade-plus coming to the Green Mountains went virtually for naught in July of 2019 when they appeared prior to Lake Street Dive at the Queen City's Waterfront Park.

Not that this mid-winter's performance itself was markedly different, but only that, unlike that concert, the Wood Brothers' performance not only hit home with, but deeply resonated with the audience. Having surmounted challenges from inclement forecasts surrounding this Flynn Center date (the opposite of the balmy summer weather before), the threesome made the most of an altogether ideal setting. Not that the trio acted complacent or took anything for granted, but they maximized the all-around positive dynamics combining the comforts of the house, the willing allegiance of the near-capacity crowd and the welcoming tone opener Kat Wright set a for the headliners in a comparably stripped-down setting accompanied by bassist/vocalist Josh Weinstein and guitarist/vocalist Bob Wagner.

The once and future front-woman of The Indomitable Soul Band curtailed her tendency to over-sing, a foible that might still have elicited the same boisterous response from the hometowners. Nonetheless, the reaction to the Wood Brothers was almost subdued in comparison. But then siblings Chris and Oliver, along with multi-instrumentalist/ Jano Rix, naturally understate everything they do so even without overt showmanship (except for a couple turns of tapdancing with his standup bass from the younger Wood), their near-two hour set built in intensity almost imperceptibly.

Interweaving songs like "Alabaster," from the recently-released Kingdom In My Mind (Honey Jar, 2020), with tried-and-true gems such as "Chocolate On My Tongue," only underscored how steadily the group has refined its well-established style over the years. The elder Wood took one of his few conventional solos on the latter tune, while the additional keyboards and vocals from drummer Rix sounded like nothing so much as a natural evolution of the sound the Brothers introduced when they first toured as a duo.

This audience of devoted fans was frequently sometimes impatient to sing and dance along during numbers such as "Luckiest Man." So, it made perfect sense those most excited were even more stirred hearing Oliver Wood's combination of disclaimer and encouragement to cut loose late in the single set (within the confines of house rules?!). When that time came, during the coupling of "Happiness Jones" with "Express Yourself," the segue was an ideal culmination of the the earnest and hearty solidarity between audience and performer, a bond initially intimated through the fervent intonations of a gospel choir that reverberated from the sound system as the Wood Brothers first ambled on stage.

At the top of the bill in Burlington's biggest venue, The Wood Brothers made it all look and sound easy. The trio's now sufficiently well-practiced from their constant road work to convey the wry wit of "Postcards From Hell" even as they displayed even greater nuances(s) in both their singing and musicianship during selections such as the closing "Snake Eyes." And the joy the trio radiate while on stage is unmistakable: "I Got Loaded" spoke as gleefully for both them and the attendees as did the relative quiet of "One More Day," during which tender, soulful moments the men gathered around a big mike center stage and welcomed Wright to (subtly) sing along.

Having codified their own style of songwriting, The Wood Brothers have reliable means to bring constant invention to their live shows (as well as their studio work). The group vary setlists from stop to stop on the road, but just as importantly, alter the instrumental accompaniment within those choices: beside vigorously plucking his stand-up acoustic bass, Chris handled Hofner and Fender Precision electrics in similar fashion, even as he regularly (and tunefully) blew harmonica, while Oliver utilized a handful of acoustic and electric guitars, with and without a slide. Rix more than once recalled the late great Band drummer Levon Helm as he parlayed snappy thumps around his drum kit, this before during and after his complementary vocal harmonies, additional keyboard coloring and the exotic percussive sounds he coaxed from his shuitar.

All this action was as seamless as the cumulative impact of the concert over its entire duration. The Wood Brothers have shown increasingly more frequent flashes of brilliance over the years they've been traveling to the Green Mountains. But this appearance at the Flynn Center was one sustained moment of the kind, one so steady it filled the room with a shared warmth as the band reinvented itself in a series of memorable moments and, in turn, reinvented itself for listeners already familiar with the music.

The mutual warmth generated during this approximately two-hour time span allowed the audience to depart undaunted outside into the icy streets of Burlington when it was all over. No doubt the experience also left the Wood Brothers satisfied as they too hit the road again.