Maximize your visibility at All About Jazz by upgrading your musician page from standard to premium. With it, you'll receive All About Jazz home page exposure, a highly stylized / ad-free musician page with bonus features and benefits, an ad, plus you control where you sell your music and so much more.
Learn More
166

Paul Motian: The Windmills Of Your Mind

BY DAN BILAWSKY
September 13, 2011
Sign in to view read count 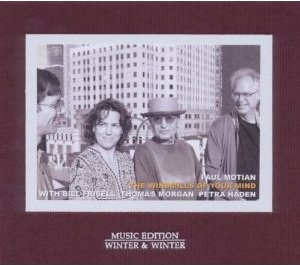 While Paul Motian's name is on the spine of this CD, guitarist Bill Frisell is the tie that binds this band. Frisell's ability to paint ethereal coats of sound in an earnest manner that speaks to his love of all things musical is at the heart of this program, which may be seen as an expansion of Petra Haden and Bill Frisell (True North, 2003)—a woefully overlooked vocals and guitar date which contains intimate and highly expressive takes on the music of Henry Mancini, Tom Waits, Stevie Wonder, George Gershwin, and many more. Motian, Frisell, Haden, and bassist Thomas Morgan, who appears on the drummer's On Broadway, Vol. 5 (Winter & Winter, 2009), recorded this album in celebration of Motian's 80th birthday, and they find success at every turn by imbuing these pieces with a sound that's both earthy and slightly off-kilter at the same time.

While the complete quartet tackles many chestnuts in inimitable fashion, Haden sits out on several occasions, allowing the remaining trio to try their hand at different things. Two different takes on a gloomy, Motian-penned waltz ("Introduction") that would have felt at home on Bill Frisell Quartet (Nonesuch, 1996) bookend the album and, along with the twangy "Little Foot" and the oft-performed "Let's Face The Music And Dance," speak to the trio chemistry shared between Motian, Frisell and Morgan.

Haden's hypnotic vocals blend in well throughout the program, and she smartly imposes her own personality on certain numbers, like "Lover Man," which avoids the same old, bluesy sentiments in favor of supple suggestions and woozy charm, and "I Loves You Porgy," which sparkles and shines. Like Frisell, Haden is completely lacking in affect, which is made abundantly clear on the duo trip through "I've Got A Crush On You" that also appears on their earlier collaboration.

While Frisell and Haden both place their unique aural stamps on this material, Motian and Morgan never play second fiddle to that pairing. The drummer's elastic sense of phrasing is a key ingredient in this mix, and Morgan integrates his bass into the very fabric of the music.

Motian's prolific output makes it easy to occasionally overlook some of his albums, but this one is likely to gain a lot of attention. The Windmills Of Your Mind is simply sublime.

Introduction (1); Tennessee Waltz; The Windmills Of Your Mind; Let's Face The Music And Dance; Lover Man; It's Been A Long, Long Time; Little Foot; Easy Living; I've Got A Crush On You; Backup; I Loves You Porgy; Trieste; If I Could Be With You; Wednesday's Gone; I Remember You; Introduction (2).