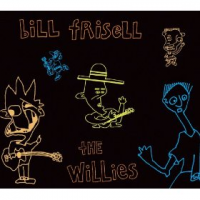 Recently, Bill Frisell seems to be averaging at least two new albums per year. Fortunately, there is no sign of this increased quantity equating to decreased quality. This album is full of all the familiar Frisell trademarks—compelling playing, quirkily familiar melodies, eclecticism, loops, swing, tradition, innovation, and, yes, fun.

On this outing, Frisell opts for a trio format, with Keith Lowe on bass, and Danny Barnes adding variety on a range of instruments. Barnes' contributions, on banjo in particular, give The Willies a countrified feeling as potent as that of the Frisell classic Nashville. As ever with Frisell, things are not as easily pigeonholed as that; the material here includes several pieces from the folk, blues and country traditions, including "Sittin' on Top of the World," "Goodnight Irene" and "John Hardy was a Desperate Little Man." And Frisell works everything together into an internally consistent whole that has few points of comparison with anyone else's work. Frisell's playing is uniquely his own, instantly recognisable even from a single note. Yet he does not play solos in the accepted sense; most of the playing here is as an ensemble, and often just sounds like three good ol' boys sitting around having fun (that word again!) Typically, the trio takes a song—Frisell's own or someone else's—and gently explores its possibilities.

For the past seven or so years (since the end of his band with Joey Baron & Kermit Driscoll) Frisell has been producing albums that have slowly illuminated different facets of a greater whole, using varying instrumental line-ups and subtle changes of style. The result is a body of work to rival anyone's produced over this period. This album continues that great run. Pure pleasure.

Sittin' on Top of the World; Cluck Old Hen; Everybody Loves Everybody; I Want to Go Home; Single Girl, Married Girl; Get Along; John Hardy Was a Desperate Little Man; Sugar Baby; Blackberry Blossom; If I Could I Surely Would; Cluck Old Hen (Reprise); Cold, Cold Heart; I Know You Care; Goodnight Irene; Big Shoe; The Willies