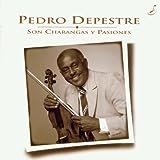 Violinist Pedro Depestre died after soloing on stage in Basel, Switzerland on Sunday, April 8, ‘01. This recording, nonetheless, saw the light with little fanfare back in 1999. The striking simplicity of the cover, as well as the earth colors used throughout the package, supporting Depestre’s photo, convey the musical experience therein very well. Its music features, as Depestre does on the cover, a worn violin, held by pliable strong Black hands, framed by modest elegance, and a wise and mischievous semblance. Son Charangas y Pasiones came from someone who was an Orquesta Aragón stalwart with an excellent formal musical education and experience that allowed him to become an important figure in the Tropicana Club band.

This recording, even so, features well-worn standards associated with Cuban popular music and it is the only album of its type in the label’s catalogue where the mix almost worked. For some unknown reasons, the label favors a type of high pitched mix that sounds “trebly” and betrays the proper sound for these types of musical works. Such a sound requires a darker and fatter sound than the one you will find here, although Depestre’s work requires less tinkering than others in the said catalogue would. It is obvious that this venture was meant to be a contemporary radio-friendly Cuban record. That, however, did not lend itself as a showcase of Depestre’s true mastery: traditional Cuban charanga music. The composer’s credit of “Mujer divina” is mysteriously missing.

If you like Cuban music, Son Charangas y Pasiones will not disappoint anyone although it remains to be seen whether it would actually elate you.