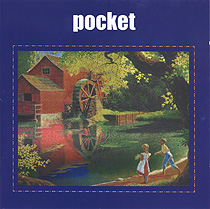 John Bisset and Alex Ward are both renowned free improvisers. Bisset organised the annual Relay improvisation festival, set up the 2-13 club and led the London Electric Guitar Orchestra. Ward, who also plays clarinet, famously appeared in one of Derek Bailey's Company Weeks when he was only 14. All of which makes Pocket even more remarkable than it would otherwise have been.

The band and the album are both stripped back to the essentials, and have a classic quality about them. They are quite literally timeless. Lead guitar, rhythm guitar, bass and drums produce music that could be from any time in the past half century. Yet it is not revivalist, revisionist, ironic or post-modern. It is honest, sincere and heartfelt. The album consists of twelve short tracks (the longest is 3:43, the shortest 1:49) and runs for just over 36 minutes; it feels as if this should be on vinyl, six tracks per side. Each track is catchily melodic and conventionally structured. After a few listens, you will be humming along and tapping your toes. Yet, so far, I have not become saturated or bored by this music. It has enough sublety and variation to withstand repeated listening and slowly reveal new pleasures.

I wonder how Pocket can follow this up and develop its strengths, so perfectly formed is this album. Anyway, that is for the future. For now, enjoy this little gem.