The Who With Special Guest Reignwolf at Jones Beach Theater 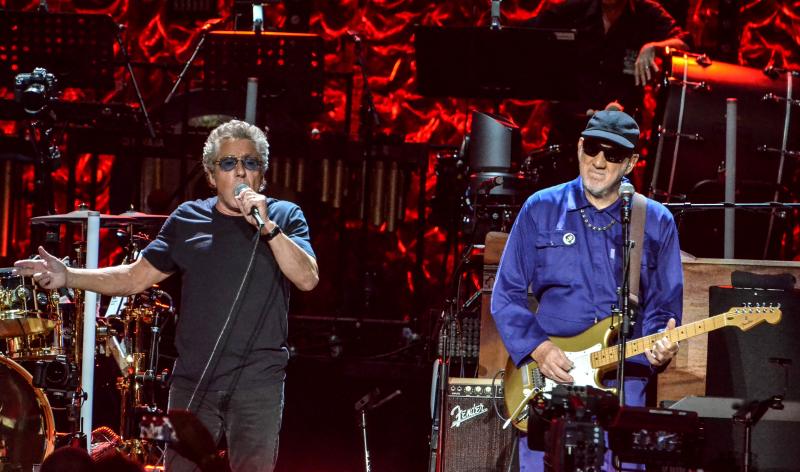 By Mike Perciaccante
September 28, 2019
Sign in to view read count
The Who, With Special Guest Reignwolf
The Northwell Health at Jones Beach Theater
Movin' On Tour
Wantagh, NY
September 15, 2019

What can be said or written about The Who, Pete Townshend and Roger Daltrey that hasn't already been put out into the world? Not a lot. So, to recap...the Who is an English rock band formed in London in 1964. The band's classic line-up consisted of: lead singer Roger Daltrey; guitarist, singer and chief songwriter Peter Townshend; bassist John Entwistle and drummer Keith Moon. The Who is considered one of the most influential rock bands in history and has sold in excess of 100 million records worldwide.

In the mid-'60s, the Who released a number of hit singles including: "I Can't Explain," "My Generation," "Substitute," "Happy Jack" and "I Can See For Miles." The group's fourth album, 1969's Tommy (Decca Records), is considered by many to the best rock opera ever recorded. The album was both a critical and commercial success and featured the hit single "Pinball Wizard."

The Who's reputation as a great live act was cemented by its legendary performances at Woodstock and the Isle of Wight Festival. The Live at Leeds (Decca/MCA Records, 1970) album documented one of the band's electrifying in-concert shows. Other hit albums followed. Who's Next (Track/Decca, 1971) included "Won't Get Fooled Again." Quadrophenia (Track/MCA, 1973) another rock opera was a celebration of the group's mod roots. Who Are You (MCA, 1978) was overshadowed by the death of Moon shortly after its release.

In 1983 the band split as Townshend had become increasingly wary of touring. The band reformed on occasion for appearances at Live Aid, a 25th anniversary tour and a number of one-off shows as well as the Quadrophenia Tour in 1996 and 1997. Regular touring resumed at the close of the '90s with Zak Starkey (Ringo Starr's son who is also Moon's godson) on drums. With the passing of Entwistle, plans to record a new album were shelved until 2006, when Endless Wire (Universal Republic) was released. Since Entwistle's death, Daltrey and Townshend tour regularly as the Who, with Starkey, bassists Pino Palladino (2006-2017) or Jon Button (2017-present), keyboardist Loren Gold, guitarist Simon Townshend (Pete's brother) and backing vocalist Billy Nicholls rounding out the line-up.

During its career, the Who have received many awards. It received Lifetime Achievement Awards from the British Phonographic Industry in 1988 and from the Grammy Foundation in 2001. The Rock 'N' Roll Hall of Fame came calling and inducted the band in 1990. In 2005, the Who was inducted into UK Music Hall of Fame. Rolling Stone magazine listed seven Who albums on its list of the 500 Greatest Albums of All Time. In 2008, Townshend and Daltrey received Kennedy Center Honors as members of the Who.

On a pleasant mid-September Sunday evening at Jones Beach, the Who and its opening act, Reignwolf, treated a sold-out Northwell Health at Jones Beach Theater crowd to an amazing night of rock 'n' roll. Reignwolf, a bluesy, indie, grungy rock trio from Saskatoon, Canada, were on first and did not disappoint, storming the stage with a tremendous set that included "Over & Over," "Alligator," "Black and Red," "Keeper," "Fools Gold," and the powerful set-closer, "Are You Satisfied?" This up-and-coming band was obviously chosen to open the show based on a high energy that clearly evoked memories of the early Who. Singer Jordan Cook was clearly a showman, delivering a powerful guitar solo while perched comfortably on Joseph Braley's bass drum. S.J. Kardash was all over the stage while he delivered the powerful bass lines that drove Reignwolf's songs. Cook's performance and, to a lesser note, Kardash's were accented by a number of windmill power chords that surely made Townshend proud.

After a sort intermission, it was time for the main event when the Who, joined by a 48-member orchestra conducted by Keith Levenson, took the stage. Before a single note was played, the crowd was on its feet. The show began with Tommy's "Overture," followed by "1921" and "Amazing Journey" from the same album. The evening's fourth tune, "Pinball Wizard," sent the already worked-up fans into a frenzy. Throughout the show there was dancing in the aisles, fist pumping and fans singing along, while the audience members channeled their inner Daltrey, Townshend and (yes), even, Moon.

The show continued with "We're Not Gonna Take It," a barn-burning version of "Who Are You," and "Eminence Front." The audience was clearly in heaven, but Townshend was perturbed. Something was amiss. Several times during the early portion of the show, Townshend commented about sound issues. The wall of sound created by the band and orchestra went out during the last minute-and-a-half or so of "Imagine A Man." The musicians appeared to be lip syncing without the music. The audience couldn't hear a thing and let the musicians know. Daltrey, shrugged and pantomimed, "What the fuck?"

When the technical issue was fixed Townshend quipped, "This is what happens when you put a rock venue in the sea." During the next, fantastic new song "Hero Ground Zero" the PA once again went down. This time, the band almost immediately stopped playing and the giant video monitors which framed the stage were shut down. The technical difficulties lasted for approximately 10 minutes. During the unscheduled intermission, Daltrey attempted to engage with the audience but, unfortunately, he couldn't be heard.

Once the sound issues were finally solved, Townshend stated, "My, my! What do I do for a living? I'm not in particularly good form anyway, so it's probably better that you didn't hear me." After pausing for dramatic effect, he continued with, "Where am I anyway?" He then stated that he particularly loved Jones Beach and that New York was, in his opinion, the center of the universe and "home" for the Who in the United States.

The show continued with Daltrey twirling his mic, Townshend windmilling power chords and Starkey pounding out a rhythmic and infectious back-beat on powerful versions of "The Kids Are Alright," "I Can See for Miles" and "You Better You Bet." The evening continued with a stripped-down acoustic version of "Won't Get Fooled Again" (featuring only Daltrey and Townshend) and "Behind Blue Eyes," with the duo accompanied by violinist Katie Jacoby and cellist Audrey Snyder. The full orchestra returned for the final seven songs of the evening: the new single "Ball and Chain," (from the soon to be released Interscope Records album called, what else, WHO), and a series of songs from Quadrophenia: "The Real Me"; "I'm One"; "5:15"; "The Rock"; and "Love, Reign O'er Me." After introducing the band, Daltrey, Townshend and their supporting musicians followed one of the basic tenants of show business—"always leave on a high note"—with an earth-shattering and life-changing version of Who's Next's "Baba O'Riley."

The evening ended with a very charming moment. Townshend explained that, "a tradition in an orchestra is, if you really want to thank the orchestra, you go and kiss the first violinist." Daltrey then gave Jacoby a gallant, sweet and gentle kiss.

It was an amazing show. At 75, Daltrey's voice is still a force; strong and resonant, he can still wail and hit the high notes. Townshend, 74, can still deliver the goods on the guitar, hitting all the notes, playing the solos, windmilling his way through the songs and delivering a sound that younger musicians only wish they could produce. The tour is called Movin' On. Daltrey has stated that it might be the last tour. Let's hope it isn't. If this is the end of the band as a touring outfit, it's definitely going out on top.