The Who At The Isle of Wight Festival 2004 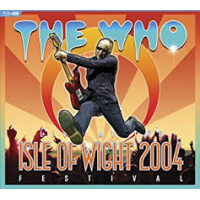 The Who Live at the Isle of Wight Festival 2004 documents an appearance at the famed British festival two years after the untimely death of bassist John Entwistle and thirty-four(!) years after the original four-man lineup of the Who, as documented on Live At The Isle of Wight 1970 (Columbia, 1996) galvanized an audience with the prowess and power of the band at its peak. It makes perfect sense to release the title in a combination package of CD and DVD too: the music calls for repeated listenings even if the video doesn't compel equally frequent viewing.

The Who's cachet has risen slowly and inexorably in the 2000's, as evident during the show by the rousing crowd response to vocalist Roger Daltrey's casual intro of selections from Quadrophenia (MCA, 1973); the slow but sure elevation of the Who's status in contemporary rock, comparable to that of the aforementioned masterwork, may have as much to do with increasingly frequent and extended touring as the redoubtable recorded canon from which the group chooses so skillfully for this performance.

It's poetic justice that "The Punk And The Godfather," "5:15" and "Love Reign O'er Me" resound with a vengeance comparable to "Bargain" and "Baba O'Riley" from Who's Next (MCA, 1971). Or that the six-hundred thousand or so at this second day of the weekend long festival respond as rousingly there as they greet the climactic excerpts from Tommy (MCA, 1969). It's a measure of the enduring strength of such landmark songs that these performances are only slightly less galvanizing, albeit just as relevant, as at the time of their original release.

The truth of this material, including "Won't Get Fooled Again," clearly resonates with author Townshend and only a little less so with his counterpart. Roger Daltrey knows full well he no longer has vocal strength to spare, but to his credit, the lead vocalist has taught himself to choose carefully those notes at which to aim straight on. Along similar lines, as furious as is the guitarist/composer's trademark windmilling of his instrument, he rarely if ever looks self-conscious. And, in more pragmatic terms, he now eschews the extended solos of some previous years for the more economical combination of the alternately tuneful and angular notes he fingers during "Who Are You."

In fact, apart from the final encore of "Magic Bus," protracted instrumental vamps are rare on the Who Live At The Isle of Wight 2004, with the contributions of the other musicians in the ensemble musicians restricted to tasteful accompaniment. Nevertheless, the introductions those men receive from Townshend are deservedly warm given their long-term connection(s) with him and Daltrey: keyboardist John "Rabbit" Bundrick" was the first supplementary musician to work live with the band following Keith Moon's death, guitarist/vocalist Simon Townshend is Pete's younger sibling, while drummer Zak Starkey is the son of Beatle Ringo Starr (and reportedly got his first kit from Who drummer Keith Moon). And apart from his pedigree as a session man, bassist Pino Palladino stepped into his role on short notice after his predecessor's untimely demise.

Except for the disciplined and energetic thrust of Starkey's playing, the latent violence of vintage Who performances with Moon and Entwistle is really nowhere to be found on here. Nonetheless, there's enough channeled passion in the musicianship that the visual sweeps, quick cuts and ultra-closeups of guitars and facial expressions mirror the power in the playing. And the cameras slow accordingly during the ingenious and creative insertion of an acoustic duet by Daltrey and Townshend on "Naked Eye;" director Matt Askem does a splendid job keeping the video in time with the momentum of the music.

That said, the set itself is paced with a professionalism that actually removes some of the very abandon at the heart of songs like "I Can't Explain" and "Substitute." There remains a smoldering intensity within the performances of Daltrey and Townshend during most of these selections though, so, not surprisingly, they evoke a proportionately rapturous response from the audience, The sextet proceeds much as the quartet used to, from well-known early material, like the couple early singles mentioned above, into more challenging selections including (at the time) brand-new material on the order of "Old Red Wine" and "Real Good Looking Boy."

While the stage production values, including the dual giant video screens, are striking to a point-in contrast to the garish and amateurish art for this package-they're nonetheless far removed from the more lavish and expansive likes of which graced The Who Live in Hyde Park 2015 (Eagle Rock, 2015). Nevertheless, the connection the group makes with the audience is, again, mutually heartfelt, engendering muted but no less earnest expressions of gratitude from the principals at show's end. Pete Townshend's lighthearted and self-effacing repartee with the crowd throughout the show is also an expression of generosity in keeping with his largely more forgiving stance on his work and that of the Who in recent years.

In line with that perspective, the titular leader of the Who's recognition of an increasingly young audience at Who concerts can hardly be purely coincidental and no doubt feeds the increasingly steady workload and, in turn, the group's increasingly high profile over the course of this decade in particular. Some may thus look askance at such activity—as well as that of the Rolling Stones, a group with whom the Who are now virtual peers—and decry them as shadows of their former selves or worse, (in the eyes and to the ears of the deeply cynical) merely glorified tribute bands.

But the fact is the genuinely great rock and roll that comprises setlists like that of The Who At The Isle of Wight Festival 2004 deserves continued recognition. As with Jagger, Richards and company, there are hardly any superior (or more proud) proponents of this stellar work than the original artists, no matter now long in the tooth they're becoming.