Magic Pie: King For A Day

BY GLENN ASTARITA
June 3, 2017
Sign in to view read count 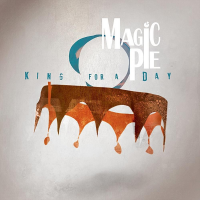 This Norwegian band was assembled upon the notion of creating a progressive sound texture that signals the 70s, and to fuse musical propensities into the modern era by bridging classic rock into a hardcore prog rock idiom. This album follows Karisma Records' recent reissue / remasters and newly offered vinyl formats of Motions of Desire (2005) Circus of Life (2007) and The Suffering Joy (2011).

There's a little for everyone, so to speak, as the ensemble bridges multiple paths into a musical speedway by flexing muscle, yet remaining fluid and limber along with a paradigm dotted with shifting cadences and melodic hooks. The band intertwines vintage prog-era stylizations, such as whimsical analog synth lines into sonorous patterns, brash choruses and swiftly enacted detours without forsaking a harmonious or synergistic working relationship.

Several movements dispersed throughout the album include dreamy EFX shadings, odd-metered time signatures and slamming pulses in addition to the frontline's stinging solo spots and soaring exchanges. "King for a Day" is the final and lengthiest track on the album, clocking in at 27:29 and is devised with a series of mini-motifs woven together. Here, the ensemble generates profound storylines via tuneful progressions and a celebratory gait, teeming with memorable hooks, flickering time changes and pounding backbeats, extended by Ken Stenberg's streaming guitar phrasings and Eirikur Hauksson's emphatic vocals. But many regions of sound and scope are offset by some tender moments. Overall, the musicians' buoyant mode of execution moves along at a brisk pace with no extended letups, augmented by theatrical sensations that amplify the excitement factor a hundredfold.

Trick Of The Trade; Introversion; According To Plan; Tears Gone Dry; The Silent Giant; King For A Day.