By MARK CORROTO
December 1, 2019
Sign in to view read count 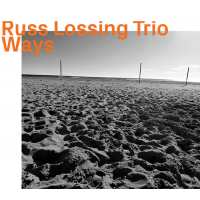 The Russ Lossing Trio should record more. Ways, which follows the excellent Oracle (hatOLOGY, 2011), is just the second recording this longstanding trio has released. More music from them would allow fans to study the development of the chemistry between Lossing, bassist Masa Kamaguchi, and drummer Billy Mintz.

The instantaneous telepathy between piano, bass, and drums is evidence of this chemistry. Where does it come from? While that question may never be answered, we do have proof of its existence in these eight compositions. During the first minute-and-a-half of the opener "Passageway," we hear Lossing solo, working somewhere between jazz and 21st-century classical music. There's not a hint of indecisiveness here. The question is which parts are composed and which improvised. When Kamaguchi enters it is with just one note, as he does often here. That one note and a Mintz' cymbal wash are the abbreviations or the maybe the most efficient manner of addressing Lossing's music. The music does eventually get busy, but always with that well-ordered distribution of notes.

That interchange between jazz and classical music is woven throughout, both painted with an improvisatory brush. "Breezeway" opens with Lossing plucking strings inside his piano before Kamaguchi enters into a conversation with Lossing. The music picks up momentum, crests, then the sound decays as it exits. While bass and drums are here to accent Lossing's piano, he does accord space for soloing. "Archway," which is segued into "Skyway," affords Kamaguchi center stage for a chest-resonating bass solo. His solo maintains the central themes of Lossing's trio. They create by exploiting the tension between the formal and the free, utilizing both a lyrical and angular attack. "Causeway" cannot decide whether it will be a Tin Pan Alley song covered by Thelonious Monk or a textured composition by Meredith Monk. As it progresses, so does its forcefulness. The trio has visited this land before, and is comfortable with its high winds. Lossing can create tension by commotion, but also from the silence of the space he leaves between notes.