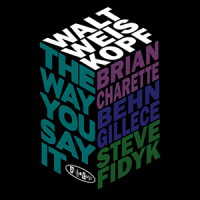 For quite some time, saxophonist Walt Weiskopf had a forum for expressing his growth and development via his many albums for Criss Cross Jazz. While that fruitful partnership ended in 2010 with See the Pyramid, Weiskopf seems to have found a new home with Marc Free's Posi-Tone imprint. With three releases added to his already healthy catalog in less than 24 months, Weiskopf continues to build on his jazz reputation even while the masses are becoming more aware of his gifts via his high profile gig with Steely Dan.

What made Weiskopf's Criss Cross run so rewarding was the way he varied the line-ups for each and every album, offering a multi-faceted view of his musical muse. Since joining Posi-Tone, the saxophonist has continued this approach and delivered three very distinctive sets, the most recent being The Way You Say It. A return to the organ combo format for the first time since 1993's A World Away, Weiskopf surrounds himself with three very gifted voices from the Posi-Tone stable, namely organist Brian Charette, vibraphonist Behn Gillece, and drummer Steve Fidyk.

What always sets apart Weiskopf's albums from the run of the mill is the original material that makes up the majority of the selections. No exception here, as nine of the twelve cuts are of the usual knotty and substantive Weiskopf variety. Of course, the Coltrane connection has always been a strong one with Walt and you can hear it in numbers like the quicksilver "Envisioned" and "Blues Combination." What sets him apart is that the saxophonist is not literally copping Coltrane licks, but using the dialect as part and parcel of his own unique vision and voice.

An up and coming artist of great depth himself, vibraphonist Behn Gillece is such an asset to this set. Listen to the way he speaks in unison with Walt on "Inntoene," only to then break off with his own harmonic support. He also provides shimmering chords behind the lovely title track, while managing not to get in the way of Charette. Fidyk also plays a prominent role, as his fills seem integral to the voicings and arrangements. In other words, this is not a blowing session. Much thought has been given to the delivery of Walt's special lines. Even the very traditional "Candy" seems to shed all frivolity in Walt's delivery, chock full of sustained runs and harmonic sophistication.

There is so much variety packed into these dozen tunes that it is really quite remarkable. The opening "Coffee and Scones" announces its arrival in Monkish tones. At the opposite end, Yarbird's "Segment" speaks with the joy of the best be-bop. Weather Report's "Scarlet Women" comes on first in dark and brooding tones before settling into a medium swing. Interestingly enough, organist Charette plays things conservatively throughout in comparison with his own output. Taking nothing away from him or Fidyk, the real stars of the show are Gillece and the leader himself. They provide a view of what the modern jazz vernacular should sound like, void of the hype, folly, and vacuum that surrounds so much of what it touted as jazz these days.