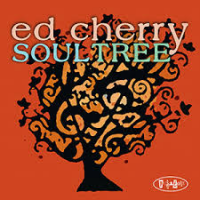 If there were a reward given for the most consistently underappreciated guitarist with the longest staying power, it would have to go to Ed Cherry. Most known for his fifteen-year stint with Dizzy Gillespie back in the '80s and '90s, Cherry has been constantly active, but criminally undocumented as a leader throughout most of his career. Soul Tree is only his fifth album under his own name, but let's hope that Cherry has found a home with Posi-Tone that will make up for the deficit in years to come.

To say that this is Cherry's best set to date is really saying something, as the guitarist is incapable of playing anything that is less than genuine or inspired. Much of the success of the session lies in the personnel and the choice of material. It is also notable that while producer Mark Free usually prefers to fill a date with many tunes at around five minutes in length, Cherry is allowed to stretch out here and it makes all the difference.

Although he seemed poised to take the title of the next great jazz organist back in the '90s while working with Don Braden and Cecil Brooks III, Kyle Koehler has been heard from far too little in the subsequent years since. Unlike some of the current crop of organists that can at times try too hard to sound unusual and out there just for the sake of being different, Koehler is the real deal. His bass lines are solid, plus his use of stops and his fluid improvising are infinitely refreshing.

A new name to this reviewer, Philadelphia drummer Anwar Marshall has been making a name for himself recently via gigs with Orrin Evans' Captain Black Big Band. His work here is intensely musical and integral to the collective voice that emerges. His snare sound is crisp and his ride cymbal dry and complex, lending an earthy vibe to this distinctive combo. His tasty fills on "Central Park West" are worth a second or even third listen.

Cherry uses many familiar lines, but manages to find new paths to explore. For example, both "Soul Eyes" and "Central Park West" are best known as ballad tempos. In the guitarist's hands, the former is delivered as a bossa nova and the latter moves at a medium swing gait. Kool and the Gang's "Let the Music Take You" is the funky groove number that opens the set so invitingly. Cherry's own "Rachel's Step" and "Little Girl Big Girl" are worthy of the rest of the material, providing fodder for all hands.

A set highlight has to be Harold Land's seldom heard "Ode to Angela." Like Hank Mobley, whose sound was often described as warm and round, Cherry's tone is similar in its burnished afterglow. In fact, Cherry moves so effortless from fret to fret that he makes it sound almost effortless, even if we inherently know that much skill is involved. On a bigger scale, it could be wrongly suggested that this is yet another organ trio record. But one takes on such a mindset and misses this brilliant set at his own peril.