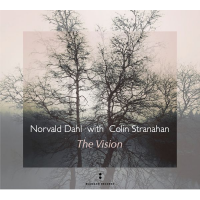 Norwegian newcomer Norvald Dahl has cultivated his expansive approach to jazz piano since his 2018 debut, Organic Chamber (AMP Music), a trio outing which included saxophonist Jon Irabagon and bassist Mats Eilertsen. That free-spirited release revealed a deeply iconoclastic spirit in Dahl, someone who is as comfortable teasing the contours of a pop-inflected tune as he is venturing into the outer reaches of improvisation or utilizing classical formalism. His follow-up, Flying High (Blamann Records, 2019), was a fetching solo disc which recalled the contemplative side of Keith Jarrett's solo work. Continuing this run of intriguing releases, his current record, The Vision, is a duo project with drummer Colin Stranahan. Never one to settle for predictable results, Dahl has crafted music that is very difficult to pigeonhole, as the album's extensive use of overdubs allows for a sound which at times resembles a piano trio and, at other moments, creates something even more unusual.

Dahl's restless creativity is on full display here. The album's opener, "Young Again," has the gentle lyricism one might hear from someone like Tord Gustavsen, with Stranahan's light touch and Dahl's subtly overdubbed keyboard bass line giving the music a pleasant, lilting feel. But just when the listener is settling in comfortably, Dahl makes a dramatic shift three quarters in, with a funky synth part which suddenly takes us into Headhunters-era Herbie Hancock territory. Stranahan's versatility provides a relatively seamless transition, but it is a jarring change of mood nonetheless. And that's just the first of many instances in which Dahl goes to his bag of tricks to keep the music de-centred. The second cut, "Running Out of Faith," takes a similar approach, with a lovely melody disrupted by layers of synth additions wich threaten to clutter the music. And "Bye Bye Blackbird" may offer the most startling displacement of all, as a potent conventional rendition featuring a terrific solo from Dahl gives way to a gaudy organ interjection that almost derails the track, which is otherwise first-rate.

If Dahl's odder choices don't always succeed, this is not to suggest that he doesn't have impressive piano chops. His effervescent "Three and Two" highlights not only his complex rhythmic sensibility but also his genuine rapport with Stranahan, whose own adventurous aesthetic emerges fully here, moving from a boisterous gallop to a delicate dance and back, seemingly without effort. And Dahl's abilities as a composer are also formidable, with an instinct for melody which shines brightest on the less-embellished tracks. The ten-minute title track which closes the album is a searching piece with emotional depth and remarkably subdued support from Stranahan. But a little gem like "Redman," with Dahl's delightful syncopation and Stranahan's spry brushwork, may be the most compelling cut of all, and it's also the one that sticks the closest to the basics: a strong tune, infectious rhythm, and a joyous buoyancy which brings out Dahl's most energized playing on the album.

Dahl is quickly working his way into the ranks of the most notable talents on the Norwegian jazz scene. In its strongest moments, The Vision suggests that Dahl is approaching his peak, and with his ambitious recording trajectory he may get there sooner rather than later.

Young Again; Running Out of Faith; Three and Two; Bye Bye Blackbird; Come Play with Me; Redman; Out of Reach; Quantum Leap; The Vision.