The Vinyl Frontier: The Story Of The Voyager Golden Record

BY IAN PATTERSON
September 18, 2019
Sign in to view read count 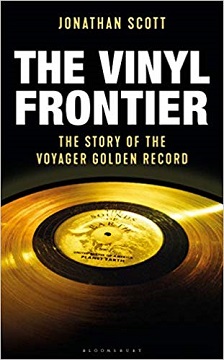 It was a message-in-a-bottle on a truly cosmic scale. In 1977, two golden records containing images, music and sounds from Earth were attached to the sides of the Voyager I and Voyager II spacecraft and launched into deep space. The records were intended as a cosmic greeting and a message of peace to any intelligent lifeforms who might chance upon the vinyl and decipher their content.

Four decades and twelve billion miles from Earth later, the Voyager spacecraft and their curious calling cards are still travelling in interstellar space at speeds in excess of 50,000 kph.

It's sobering to think that millions of years hence, long after Earth is just so much space dust and cosmic debris, Voyagers I and II could still be hurtling through the dark void with their vinyl passengers.

Though the maths and science behind the Voyager missions is mind-boggling, the Golden Record project was, as author Jonathan Scott relates, something of an epic equation in itself. It's a tale of science meets art, of mathematics entwined with poetry, of romanticism versus politics. But above all, it's a tale of hope.

A life-long amateur stargazer, Scott has also written for Record Collector, his twin passions thus making him the ideal guide and narrator throughout this strange tale. In a flowing prose laced with wit and a nice line in irony, Scott reconstructs the steps of this great adventure to boldly go where no vinyl has gone before.

The idea to send a message beyond our solar system was not a new one. Pioneer 10 and 11, launched in 1972, carried simple metal plaques bearing a map showing Earth's position in relation to a number of pulsars, the solar system and drawings of a human male and female. NASA, however, objected to the short line that indicated the woman's vulva, and as a result—and reflecting gender politics of the day—it was airbrushed out. As Scott relates, nudity would still be an issue five years later.

Astronomers/astrophysicists and extra-terrestrial experts Carl Sagan and Frank Drake, who had worked on the Pioneer plaque, were called upon in December 1976 to 'send a message' with the Voyager spacecraft to be launched in August 1977. Wasting little time, they assembled a small team of dedicated friends, family and enthusiasts to realize the project. At no step, or so it seems, was the process a smooth one. After all, the author reminds us, the Golden Record was created with two audiences in mind.

Why music? A big mission of the Golden Record team was to transmit ideas not just of how humans think and behave, but also of how they feel. Sagan had been influenced by the writings of Sebastian von Hoerner of the National Radio Astronomy Observatory, who argued that as music is governed by the physics of sound and the mathematics of harmonics, it could prove to be a universal language.

For most of the NASA scientists, unsurprisingly, the Golden Record—and its team's debates on whether or not to include Elvis Presley or Louis Armstrong— was a largely irrelevant detail in the most ambitious space program since the Moon landing.

Voyager I and II's basic mission was to pass by, photograph and collect data on Jupiter, Saturn, Uranus and Neptune. It must have irked the Voyager team, the author intimates, that so much media attention was directed towards the Golden Record in the middle of such an epic space venture, one of unprecedented ambition. But then as now, the mere notion of a search for alien life proved irresistible to the public.

NASA's attitude to the Golden Record was lukewarm at best, and only at the last minute, pressured by media interest, did it allow a press conference on the record. The Golden Record press launch was held in the less than salubrious surroundings of a double-booked motel. There, the entire Golden Record team fielded questions from the press as a Polish wedding raged in the same room, with only an accordion-style barrier separating the two rather distinct groups.

If there are any voices missing from the book—other than the aliens—they likely belong to those of NASA's Voyager team. With the hindsight of decades, it would be a gas to know what they actually think of the photos, sounds and music intended for alien consumption.

Scott succeeds in capturing the somewhat ad hoc nature of the Golden Record adventure and the tireless enthusiasm of those behind it. He chronicles, not without humor, the multiple obstacles the team scrambled to overcome, some of them, inevitably, which came down to individual personalities. Compared, however, with the technological, political, moral and philosophical challenges involved in representing planet Earth on a couple of LPs, the ruffling of any individual egos comes across as pretty irrelevant.

For factual detail the author draws not infrequently from Sagan's book Murmurs of Earth: The Voyager Interstellar Record (Random House, 1978), and dips an occasional toe into Irish film maker Emer Reynolds Emmy-winning documentary The Farthest (Screenbound Pictures, 2017). Though there may well be nothing new under the sun, Scott's personal interviews with many of the folk involved in shaping the Golden Record project, added to his own sharp insights, help illuminate an old, though ongoing story.

The task of selecting a strictly limited amount of music and photographs to somehow represent Earth is the story of the mother of all mixtapes. Tim Ferris, former bureau chief at Rolling Stone, and founder of the Key Biscayne Astronomical Association, was a key figure here, as was renowned ethnomusicologist Alan Lomax, but the team as a whole shaped the final selection. They had until the end of May 1977. Lomberg summed it up thus: "It could have taken years, but we didn't have years...And I don't know if we could have done it any better, if we had years to do it."

Sourcing pictures from libraries and magazines—National Geographic was a major contributor—and attaining permission to use the photos was one challenge, portraying a sense of scale and context, Scott reveals, was quite another. The greatest feat, however, was the technical one of transferring the information onto vinyl. If there has been an unsung hero in the whole Golden Record story it is audio technician Vladimir Meller, and Scott rightly dedicates a chapter to his ingenuity and creativity.

Readers can pore over the complete list of music cut on the Golden Record and debate the merits of excluding, to cite just two examples, The Beatles and Bob Marley. Think you could do a better job?

Scott reminds the reader of the playing field the Golden Record team had to contend with in 1977 and lays down a daunting challenge to the reader: "You have six weeks. No computer. No smartphone. No internet. No quick emails. No handy templates. No PDF attachments. No keyword searches. No digital files. No editing software. You're allowed to write letters and make phone calls. You can visit libraries and bookshops...Good luck with that."

It comes as a surprise to learn that the music on the Golden Records was never properly released commercially. Lomberg surmises: "We learned the hard way that it was easier to send the record across the galaxy than release it in the marketplace."

The Golden Record is a fascinating story that continues to attract global attention on each significant anniversary of the Voyagers' launch. And, as Scott sympathetically portrays in this entertaining book, it's a downright weird story. It's a story of dreams and folly, of love, endeavor and of human imperfections—engraved for eternity on both sides of two golden LPs.