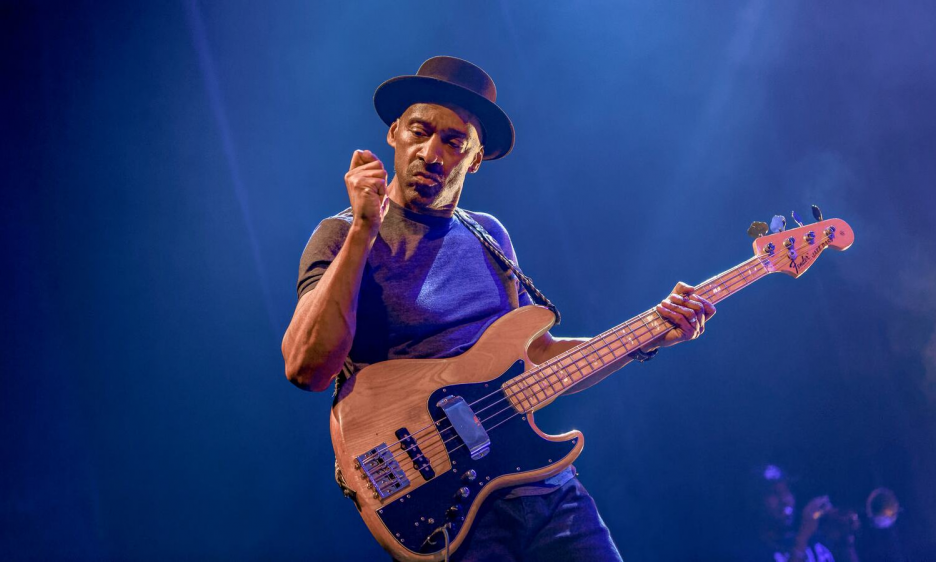 You gotta feel for Russell Gunn—the trumpet player employed to spend around a half-hour every night being Miles Davis. Of course, as a member of Marcus Miller's band, it's not unreasonable to expect a nightly run through "Tutu," the title track of Davis' 1986 Warners debut—widely dismissed at the time, now held up as an important jazz-funk reference point—written and produced by Miller, and the moment that put the electric bass hero on the map.

What Gunn might not have anticipated when he signed up, though, was the responsibility of performing a note-perfect rendition of another title track from an even more divisive crossover masterpiece—"Bitches Brew." And Miller's quintet don't just jam on that tune's moody groove— they reproduce minutes of the seminal 1970 recording almost verbatim, a suite-like presentation which, with just five players, recreates an improvised vamp with more than a dozen credits. Miller himself even switches to bass clarinet midway to coax more menacing tones. But the heaviest lifting was all Gunn's—and the American veteran didn't just nail Davis' brittle-yet-fragile tone and haunting, hallowed phrasing, but inhabited the icon's ethereal haze, leaning and parrying in not so much a tribute, but as a man possessed.

Nonsense, of course, Gunn's musicianship is all hard work. Such a careful analysis, transcription and recital of a spontaneous work is a boggling cerebral feat— but holds up to aesthetic scrutiny, too, the spellbinding centerpiece of an otherwise brilliant, but business-like, set.

Touring in support of last year's wonderfully named Laid Black (Blue Note, 2018), the set was bookended by the LP's deepest grooves—the opening head-nodders "7-Ts," "Untamed" and "Sublimity," while towards the close came the steamy "Trip Trap"—each, naturally, masterclasses in contemporary funk-jazz of the highest caliber, and vehicles for the leader's seriously badass bass playing. Attuned to modern hip-hop and trap beats but eschewing any whiff of cheap trickery, the record revealed a now-60-year-old firing at the peak of his creativity, and with much of the same band in tow, these faithful readings were an utterly guilt-free pleasure.

While not short of shotgun slapping or finger-snaking riffing, Miller's virtuosity is cushioned in a producer's sensibility. Never quite sure whether he's providing or riding the groove, the bassist's effortless lead/rhythm lines skirt the fatback pump of drummer Alex "Bisqit" Bailey, while keen-eared keys player Brett Williams fills in the bottom whenever his boss is busy in the higher register (that's a whole lot of the time, then).

Gunn is joined on the front line by saxophonist Alex Han, another long-term associate who likes to probe the upper register of his own instrument in furious trills and triplets, to frequently thrilling effect. Miller himself was back on the bass clarinet for the poignant "Preacher's Kid," a hymnal tribute to his father which revealed that had the writer been born with stubbier fingers, he might have still had a respectable career as a woodwind player.

Miller's weightier previous release Afrodeezia (Blue Note, 2015)—a celebration of global groove inspired by his calling as a UNESCO Artist for Peace—was recalled with the intoxicating West African-inspired "Hylife," both the most memorable and important original of the evening. But, inevitably for a bandleader still better known for his production work for others, it was the covers that marked the evening's explosive highs.

The imperial beat, declarative synths stabs and trudging bass wander of "Tutu" spiraled into a joyous set closer—and a fitting tribute to what will forever be Miller's greatest legacy. For the encore, the virtuoso dug back deeper into his most enduring collaboration with crossover sax star David Sanborn—with whom he clocked 14 LP credits over a two-decade spell— with a brisk bounce through the "Run for Cover." Not a chance.