The US Festival 1982: The US Generation

BY DOUG COLLETTE
September 2, 2018
Sign in to view read count 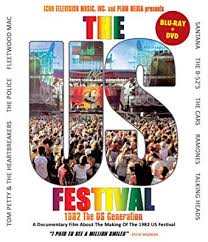 By title alone, The US Festival of 1982 might seem light years removed from the abiding fascination with festivals now pervading our culture. But if director Glenn Aveni's ninety-minutes plus documentary proves anything, it's that this event founded and sponsored by Apple co-founder Steve Wozniak presaged the sophisticated multi-media presentations of such events today.

The scrupulous depiction of the evolution of the festival almost renders the fifty minutes approximate of bonus material redundant. Commentary from Aveni may or may appreciably enlighten the viewer any more than expanded interview segments, somewhat sloppily edited, with Stewart Copeland of the Police, Mick Fleetwood of Fleetwood Mac and Wozniak (separate from that which appears within the main content). It is noteworthy, however, that the drummer is but one individual who likens this event (the first of two, another the very next year) to present-day Coachella.

Like a good storyteller, Glenn Aveni wisely reaffirms the fundamental intent of The US Generation, creature comforts and otherwise. Offering an explanation of the sequence of events that led to the three-day offering from various perspectives, operational and otherwise, those intervals devoted to colorful anecdotes involving the late Bill Graham offer some lighthearted respite from more mundane angles as do appropriately wide-angle shots of the audience being sprayed with water from firehoses to alleviate the sweltering heat (purportedly the aforementioned rock impresario's idea). The flow of the main narrative, however, becomes choppy with the insertion of performance footage, often (over-) introduced with intrusive explanatory banners on the screen.

The logic behind insertion of concert segments also remains at least somewhat elusive throughout The US Festival 1982. More often than not, otherwise noteworthy bands such as the sociopolitical-oriented Gang of Four appear in mere snippets, but intentionally or not, the quirky likes of Oingo Boingo, the B-52's and even to some extent, the Police and the expanded lineup of Talking Heads, mirror the keyboard-oriented, synth-permeated contemporary style of our times. No doubt licensing and video rights come in to play in the absence of, for instance, Jackson Browne, but it would do well for producers to reference (perhaps in the credits?) those instances where bands' performance have been released independently, i.e., the English Beat, who issued Live at the US Festival '82 & '83 (Shout Factory, 2012). As it is, the studied, mechanical likes of the Cars almost takes precedence over the naturally organic musicianship of Tom Petty and The Heartbreakers and the Fleetwood Mac lineup with Lindsey Buckingham and Stevie Nicks. And even as an overriding theme in the film revolves around the idealism of community taking precedence over profit, a certain air of superiority creeps into many observations of The US Generation: to be fair, the eventual losses incurred by the project were in the neighborhood of twelve million, but that still begs the question of the lengthy tally of Kickstarter contributors in the DVD credits.

Still, The US Generation turns into a timely film through its depiction of the deliberate forethought in planning adequately for basic amenities (based on a crowd size of over four hundred thousand), those fundamentals in addition to ancillary attractions including giant video screens at the stage, on-site tech-oriented attractions and a satellite link to Russia for broadcast of part of the festival. It's as if The US Festival 1982 took place in 2018.