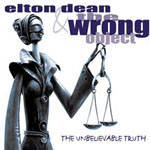 In the world of improvised music the energy of a first meeting can often be better than when there's been adequate prep time. British saxophonist Elton Dean's collaboration with the Belgium group The Wrong Object wasn't meant to be impromptu. And with Dean and the improvisational jazz/art rock quintet having exchanged scores for the October 18, 2005 performance documented on The Unbelievable Truth, it isn't as if either party had no preparation. But unexpected circumstances scuttled a pre-show rehearsal, so what you hear is literally a first encounter.

The Wrong Object has built a reputation for its astute interpretation of the music of Frank Zappa, but its members are strong and idiosyncratic composers in their own right. They're also intrepid improvisers who combine an appreciation of the jazz vernacular with a more aggressive rock stance, making them ideal foils for Dean, whose reputation was built on a distinctive blend of free improvisation and unequivocal melodicism that defined his early 1970s tenure with Soft Machine, and other non-related projects.

Dean's contributes three familiar tunes to the seventy-minute set. "Seven for Lee may be based around an ambling and repeated 7/4 bass pattern, but no matter how many times it's been covered it manages to provide compelling improvisation. "Baker's Treat is the closest thing to a traditional jazz ballad that he's ever written. Dean navigates the elegant changes with a combination of lyricism and simmering intensity that, along with Jean-Paul Estiévenart's spare and tender trumpet solo, makes this a definitive reading. "The Basho Variations, based on the barest of themes, ultimately becomes a swinging solo feature for Dean and a freewheeling in-tandem spot for Estiévenart and tenor saxophonist Fred Delplancq.

The collective composition "Millenium Jumble approaches greater extremes, another tune based around a simple vamp. With guitarist Michel Delville's jagged accompaniment and drummer Laurent Delchambre's loose and, at times, explosive interaction, its further demonstration of just how ( in the right hands) much can be done with so little.

The balance of the seven compositions are by Delville, ranging from the brooding, Middle Eastern texture of the title track with bassist Damien Pollard switching to a Hugh Hopper-like fuzz bass which approaches early-1970s Soft Machine territory. Delville takes an edgy, distorted solo that, while clearly his own, makes clear his roots in Zappa through its wild sense of abandon. "A Cannery Disaster illustrates Delville's own sense of the absurd, with a knotty theme featuring his only vocal appearance leading into another energetic exchange for everyone.

That this would be one of Dean's last live appearances before passing away a few months later makes The Unbelievable Truth worth checking out. But even if Dean were alive today and what turned out to be a one-off affair became an ongoing collaboration, this first meeting stands on its own merits as a compelling mix of diverse writing and unfettered improvisational imagination.