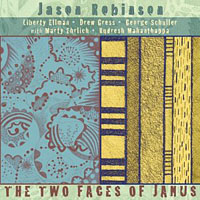 Currently serving as Assistant Professor of Music at Amherst College in Massachusetts, multi-reedist Jason Robinson originally obtained his Ph.D. in music from the University of California. A promising new arrival to the East Coast scene, Robinson's academic background imbues his episodic writing with an organically cohesive sensibility, while his years spent co-leading the longstanding bicoastal ensembles Cosmologic and the Cross Border Trio lend his focused improvisations a warm, economical lyricism.

The Two Faces of Janus, Robinson's Cuneiform Records debut as a leader, is an exceptional example of modern jazz that looks to the past and future for inspiration—lending credence to its symbolic title. Robinson calls upon the singular talents of some of New York's finest musicians to interpret his engaging compositions, employing a rotating roster of personnel that ranges from duo to sextet, including saxophonists Marty Ehrlich and Rudresh Mahanthappa, guitarist Liberty Ellman, bassist Drew Gress and drummer George Schuller—all renowned bandleaders in their own right.

Robinson seamlessly blends historical and stylistic precedents into a forward-thinking aesthetic built upon the unorthodox structural foundations of linear narrative development, polyphonic counterpoint and modulating rhythm cells. Such confluence can be heard in "Return to Pacasmayo," the chimerical hybrid of angular funk, swaggering blues and ebullient post-bop that opens the album. The sinuous be-bop-influenced lines of "Persephone's Scream" and the rich Duke Ellingtonian voicings of "Tides of Consciousness Fading" invoke timeless jazz traditions, while Ellman's heavily amplified fretwork on the opener and the variable time signatures of "The Elders" push the proceedings headlong into the future.

Proving his mettle as a magnanimous leader, the vivacious "Cerberus Reigning" and the ambitious finale "The Twelfth Labor," focus on the core quartet, casting Robinson's probing ruminations and Ellman's nimble cadences against Gress and Schuller's dramatic rhythm changes and quicksilver tempo shifts—bringing to a close one of the year's most compelling modern jazz recordings.