By Glenn Astarita
December 12, 2014
Sign in to view read count 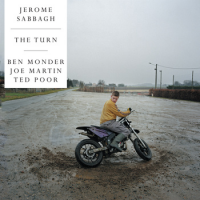 This is one of three bands tenor saxophonist, Jerome Sabbagh leads amid his numerous gigs as a session artist and group member with pianists Laurent Coq and Guillermo Klein, paired with many other diverse musical roles in the modern jazz community. This quartet strikes back with its third album, following Pogo (Sunnyside, 2007) and North (Sunnyside, 2004). Besides his burly tone, melodic structures and fluent improvisational acumen, one of the key differentiators is how Sabbagh transparently melds modern mainstream with the outside schema.

You couldn't ask for a better supporting cast with guitar luminary Ben Monder, drummer Ted Poor and bassist Joe Martin engaging in a synergistic aural feast. The saxophonist projects emotive sensibilities whether he's phrasing a soft encounter, haunting opuses or executing a textural dirge on "Keep the Fool," contrasted by the bassist's penetrating ostinato and variable cadences. Yet Sabbagh's frameworks engender great depth, and at certain intervals, Monder's distortion tinged soloing appears to be way off in the distance, followed by the quartet's resounding aerial bombardment.

Sabbagh makes his sax sing on the sanguine "Long Gone," followed by Poor's sweeping patterns that paint an expansive backdrop. And while many of these works offer spacey passages, rendered with dense interactions, Monder occasionally takes center stage, where the band realigns and proceeds to knock your socks off. Diversity is a common denominator as well. For instance on "The Rodeo," the musicians initiate a mid-tempo and toe-tapping shuffle swing groove, enamored by the leader's soul-jazz based storyline, etched with a slight rasp and reverse-engineering motifs. But "Cult," poses a nightmarish vibe as Monder tears it up via his Judgment Day-like riffs. With this program, Sabbagh's 360-degree approach to jazz composition, linked with the respective artists' colossal chops and complementary tactical approach, emerges as a prime selection for 2014.

The Turn; Long Gone; Banshee; Ascent; The Rodeo; Cult; Once Around the Park; Electric Sun.