By HRAYR ATTARIAN
February 12, 2016
Sign in to view read count 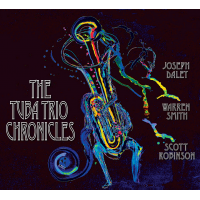 Composer and tubaist Joseph Daley pays tribute to the great saxophonist/flutist Sam Rivers with his stimulating and provocative The Tuba Trio Chronicles. Daley and percussionist Warren Smith, who appears on the current album, were member of Rivers' tuba trio in the 1970s. They both appeared on Rivers' three volume Essence (Circle, 1976), a live recording at the legendary Bim Huis in Amsterdam. This intriguing set of LPs, sadly, remains both out of print and not reissued on CD.

The centerpiece of the disc is the cinematic and introspective "Terrarium." The track is built upon a framework of processed sounds that create a delightfully surreal and captivatingly ethereal ambience. Smith, on his unique multiple percussion instrument (MPI), rolls and tolls, thunders and flows setting the somber and visceral mood imbued with a definite primal spirituality. His full toned marimba gallops within the electronic sonic lattice. Daley, switching between euphonium and tuba, plays a serene and melancholic melody with Asian influences that spreads like a mysterious fog over Smith's mallets. Robinson weaves loose, flittering patterns with his muscular bass flute and his mournful clarinet solo adds a mystical edge to the music. The closing three-way conversation among Daley's growling horn, Robinson's resonant woodwind and Smith's chiming cowbells and crotales is sublimely liturgical

The three maintain the same degree of mastery over their performance when freely adlibbing as well. The unfettered extemporization "Emergence," the men play off each others' inventive ideas with dexterity and intelligence. Daley's warm, stately euphonium and Robinson's reverberating sarrusophone and jazzophone engage in a lyrical and passionate dialogue that is akin to two, stream of consciousness feeding off each other. Smith's booming tympani and splashing cymbals add an earthy third dimension to this ingeniously poetic tune.

This captivating and stirring disc is further testament to Daley's superb musicianship and his artistic brilliance. The vibrant spontaneity, the shared musical vision and exquisite camaraderie make listening to this multi-textured record an inspirational and invigorating experience, one that can be savored anew with each spin.