Duke Ellington And His Orchestra: The Treasury Shows, Vol 20

By CHRIS MOSEY
November 4, 2015
Sign in to view read count 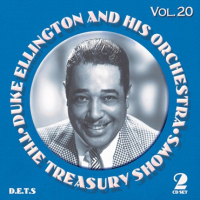 What makes this album stand out among the welter of Treasury Show releases is that most of the tracks feature Oscar Pettiford on bass.

Duke Ellington hired many excellent bass players but only two who were great. The first was Jimmy Blanton. In the short time he was with the band—from 1939-1941—he transformed the bass into a front line instrument, changing its role in jazz forever. When he died, aged just 23, from tuberculosis, Duke searched despairingly for someone to fill his shoes.

In 1945 he came up with Pettiford, like Blanton, a native American. He was badly needed. Ray Nance had returned, boosting the trumpet section to six pieces and Joe—Tricky Sam—Nanton was back playing trombone alongside Wilbur De Paris, Lawrence Brown and Claude Jones. Pettiford's bass anchored what was now a decidedly brass-heavy orchestra and kept its sound light and airy. He stayed with Ellington for just three years, before leaving to help Charlie Parker and Dizzy Gillespie create bebop. Pettiford aside, there's much else to please Ellington aficionados here.

Billy Strayhorn takes over on piano for his wistful composition, "A Flower Is A Lovesome Thing," featuring Johnny Hodges' alto.

Then there's "Main Stem," with solos by Cat Anderson, Hodges, Nanton, Al Sears and Lawrence Brown. Tricky Sam joyously celebrates his return to the fold with an up-date of his 1936 party piece, "In A Jam."

CD2 contains Ellington's take on "Lover Man," with a vocal by Marion Cox that suffers by comparison with Billie Holiday's classic interpretation. "Riff Staccato" is fun despite Ray Nance's vocal being woefully under-recorded. There's an interesting version of "Mood Indigo" featuring a fine solo by Ellington and solid work by Shelton Hemphill on trumpet and Harry Carney on clarinet.

Cat Anderson goes stratospheric on "Riff 'N' Drill," taken at a frantic pace. "Emancipation Celebration," part of "Black, Brown And Beige," Duke's first extended work, is a meditation on the ending of slavery. Eight months previously, when they first played it at Carnegie Hall, the boys in the band were so nervous they had to be given tranquilizers by Ellington's personal physician. "Don't Get Around Much Anymore" features some lovely, lyrical playing by Hodges before "Things Ain't What They Used To Be" brings the proceedings to a suitably rocking conclusion.

CD1: Take The A Train; A Flower Is A Lovesome Thing; Main Stem; A Ghost Of A Chance; In A Jam; I’m Just A Lucky So And So; Stomp, Look And Listen; Come Rain Or Come Shine; Things Ain’t What They Used To Be; Summertime; Jack The Bear; Sentimental Lady; In A Mellotone; Rockin’ In Rhythm. CD2: Take The A Train; Mood To Be Wooed; Johnny Come Lately; They Say It’s Wonderful; Strange Love; Honeysuckle Rose; Don’t Take Your Love From Me; Blue On The Double; Take The A Train; Come Sunday; Light; Lover Man; Riff Staccato; Mood Indigo; Riff ‘N’ Drill; Johnny Come Lately; Emancipation Celebration; Go Away Blues; Don’t Get Around Much Anymore; Things Ain’t What They Used To Be.