Evan Parker: The Topography of the Lungs 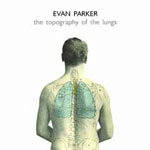 Originally released in 1970—with catalogue number Incus 1, thus launching Evan Parker, Derek Bailey & Tony Oxley's famous label—this is a long awaited and historic reissue. When Parker and Bailey went their separate ways in 1987, Parker took his Incus recordings and other archived material with him. Since the advent of Psi, most of his Incus recordings have been re-released there, with others mooted (Circadian Rhythm?).

However, there was a long-standing agreement between Parker and Bailey—at the latter's request—that this recording would not be released as long as Bailey remained a director of Incus, which he did until his death last December. Fittingly (and touchingly, given the Bailey-Parker rift), this release bears the dedication, "In memoriam Derek Bailey 1930-2005.

The 21-minute "Titan Moon (which occupied the whole of side one of the LP release) immediately sets the scene. Although free improvisation was at least five years old by the time this album was recorded, the trio's playing still shows clearly discernible links to free jazz. It is already a long way forward from, say, Joseph Holbrooke or even early SME, but still light years away from Company with its deliberate avoidance of jazz vocabulary and syntax. In 1970, free jazz and free improv were still joined by an isthmus, albeit one that was rapidly being eroded.

"Titan Moon would fox many a listener in a blindfold test: Parker's playing clearly shows a debt to Coltrane; crucially, Han Bennink's remorseless drive gives the music an irresistible pulse and a sense of boundless energy and forward momentum; maybe most surprising, Bailey's guitar is in transition from a traditional (mainly supportive) role within the trio to something more iconoclastic.

Both For Peter B and Peter K (the title acknowledging the vital influence of the Berlin scene) and "Fixed Elsewhere are similarly transitional. Again, Bennink propels them along with typical verve—but with few traces of his lovable eccentricity. Only on "Dogmeat, which closed the original album, are there clear signs of future developments into improv as it would become. The three players seem to have no model of how the piece will develop—it is shaped by their reactions to each other and consequently it is ever-changing in its focus, its tempo and its energy levels. Tellingly, Bailey's profile is higher here than in the preceding pieces.

The original master takes of the album are now lost, so this CD has been remastered from the best LP version available (a virgin Japanese pressing, not surprisingly). But fear not, the sound is high quality throughout. Two previously unissued pieces have been added to the original material, and while it is nice to hear them, they provide no great insights beyond the original LP.

Given its legendary status—brought about by decades of scarcity (and awesome auction prices)—it is inevitable that this release has a sense of anticlimax for some; nothing could live up to their expectations. Nonetheless, as well as being an illuminating historical snapshot, it is thoroughly excellent and still sounds remarkably fresh, in the pole position for reissue of the year.