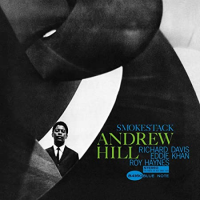 Emerging at the beginning of the '60s, Andrew Hill was always difficult to pigeonhole. The pianist was too aligned with mainstream harmony to be considered avant garde, too complex a writer to be considered free, too abstruse a player to be considered mainstream. The people at Blue Note knew they had a gem when they signed him. What they didn't know was that it would be decades before his value was truly appreciated.

But better late than never. Smoke Stack, the second of six Blue Note sessions recorded between November 1963 and February 1965, was the pianist's fourth release by the label. While Hill's other sessions from the time were equally challenging from a compositional perspective, Smoke Stack was the most inherently difficult to fathom. It eschewed the more traditional instrumentation of Black Fire (1963), Judgement! (1964) and Point of Departure (1965) in favor of a piano/two-bass/drums lineup that was likely too unorthodox, even for a label that wasn't particularly averse to the unconventional.

Hill's partners on this recording are bassists Richard Davis and Eddie Khan, along with drummer Roy Haynes, who also played on Black Fire. Other sessions from 1963-65 would feature different drummers, but Davis remained a constant throughout the period. Always a thinking man's bassist, Davis is at his most dominant on Smoke Stack, where Khan and Haynes assume the role of rhythmic anchor.

Unlike Ornette Coleman and John Coltrane, who had already used twin-bass lineups but typically buried them underneath one or more solo voice, Hill places Davis front and center alongside his own idiosyncratic playing. Even on the balladic "Verne," where Khan sits out, Haynes steadfastly maintains rhythmic consistency while Davis interacts more persistently with Hill. On "Wailing Wall," Haynes' prevalent cymbal work sets a precedent for drummers like Jon Christensen and Jack DeJohnette; Davis' out-front arco gives credence to the song's title.

Even on the semi-swinging "Ode to Von," where the harmonies feel mainstream, Hill's playing always skews things just the slightest bit off-kilter. But the tandem playing with Davis ensures an even greater elasticity—which sometimes feels as though it might actually fall apart completely if it weren't for the real rhythmic glue that Haynes provides to bind this quartet.

Looking back on Hill's emergence, it's remarkable how much he varied the contexts in which he worked. Smoke Stack may have been more of a challenge to listeners at the time, but today it stands out as one of Hill's most satisfying efforts, if only because of his remarkable interplay with Davis.

Smoke Stack; The Day After; Wailing Wall; Ode To Von; Not So; Verne; 30 Pier Avenue;