One for All: The Third Decade 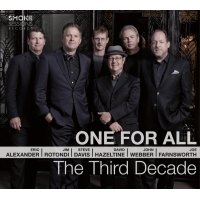 Hard to believe it will be twenty years ago next year that the hard bop ensemble One For All debuted with Too Soon To Tell on the fledgling Sharp Nine label. Formed as a group that regularly played together at an uptown Broadway club called Augie's, each member was just at the start of their own budding careers. Even today, it continues to be a surprise that these gentlemen still find the time to assemble for the occasional record date or live appearance.

Much has transpired since 1997. Augie's was transformed into Smoke, the club that continues to thrive and provides the imprimatur for the record label documenting the set at hand. Fifteen albums are to be found in the band's oeuvre, including four on Sharp Nine, five for Criss Cross Jazz, four for the Japanese Venus label, and two live concert recordings. Indeed on the cusp of starting their third decade together as a band, this fittingly titled set brings into focus all of the best qualities of these gentlemen, including their composing talents and singular musical voices. It also happens to be their first new release in five years.

The proceedings open with the Steve Davis original "Easy." Those crisp snare hits from drummer Joe Farnsworth announce that we are indeed in for a pleasurable ride. The warm timbre of the three-piece horn section is a trademark of this unit and it's all here to enjoy from the very first note. The tempo picks up with David Hazeltine's "Buddy," a tribute to his mentor and fellow pianist Buddy Montgomery. The sprightly bossa tempo brings some joyous shouting from trumpet ace Jim Rotondi.

Hazeltine is also responsible for the cheery arrangement of "It's Easy to Remember" and another tribute in the guise of "K-Ray." Dedicated to recently deceased drummer Killer Ray Appelton, this one is a brisk and swinging ditty that finds Farnsworth in all his glory. Particular attention should be paid to the sound the drummer achieves. His toms are tuned high and his ride cymbal has a nice, dry ping, all of which are individualistic and very pleasing. His solo statements are articulate and engaging and never wear out their welcome.

Both Davis' "Daylight" and Eric Alexander's "Frenzy" are ebullient numbers that bristle with excitement. The former speaks with a jaunty Latin-esque voice while the latter is straight ahead swing buoyed by John Webber's rock solid bass lines. For Rotondi's contributions, there's the 16th note groove of "For Curtis" and the long-lined "Ruth," both of which settle into a pleasurable platform for soloing. Although it goes without saying, both Davis and Rotondi are chock full of great ideas and say much over the course of their many solos.

Alexander, Davis, Hazeltine, and Rotondi have largely served as the band's main arrangers/writers over the course of the band's history. It is then a pleasure to find that this date marks the first time all six members contribute to the program. Webber's "Babataya" recalls some of the funky gems from the Blue Note era, such as Lee Morgan's "Party Time." Farnsworth's "Hey,Stevie-D" makes for a fine shuffle that puts Alexander in the mood to strut his stuff. And speaking of Alexander, his gorgeous ballad "Ghost Ride" serves as moment of calm in an otherwise pretty upbeat session.

Over the course of The Third Decade's eleven generous tracks, we get to hear a well-honed machine operating at peak power. Even though distances often keep these six gentlemen apart, one can only hope their new home at Smoke Sessions will provide for further releases and the we won't have to wait another five years before the next one.