BY HRAYR ATTARIAN
February 25, 2015
Sign in to view read count 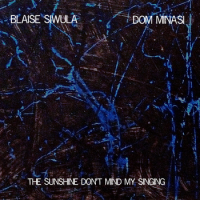 Saxophonist and clarinetist Blaise Siwula and guitarist Dom Minasi share a unique musical vision and seamless camaraderie. Years of performing and recoding together have crystallized their adventurous outlook and their intellectual communion. The sublime set of spontaneous duets; The Sunshine Don't Mind My Singing is the perfect showcase of these attributes.

Siwula and Minasi weave elements from various genres into the half a dozen, stimulating improvisations that comprise the album. "Upstream Boogie," for instance starts out as a deconstructed rondo as Siwula's warm, resonant clarinet and Minasi's percussive guitar engage in a circular, sinewy dance up and down the scales with breathtaking agility. Their showcase of virtuosity is not at the expense of artistic creativity. The piece evolves in a series of fast, repeating motifs into an intelligent and emotive exchange of ideas. It concludes with Minasi's thick chords chiming against Siwula's troubadour like woodwind song.

Despite the angular and often dissonant nature of these harmonic explorations they all subsume a strong melodic undercurrent. On the title track Siwula's fiery boisterous clarinet winds tightly around Minasi's intricate tonal patterns resulting in swirls of bright sounds that swing with their own internal "logic." A bittersweet lilt accents their flirtations with atonality.

This intellectually thrilling and innovative album requires and rewards close and attentive listening. It is certainly not for background ambience but it does have a surprising accessibility that will satisfy and captivate a wide range of open-minded music fans.