By JAKOB BAEKGAARD
January 26, 2018
Sign in to view read count 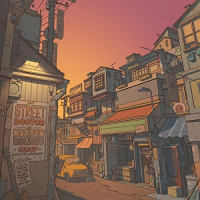 Even though Danish guitarist Morten Haugshøj has been a familiar presence on the jazz scene in Aarhus for a long time, his album The Street Doctor feels like a new a beginning. Perhaps it has something to do with the stylish cover art drawn by illustrator and pianist, Simon Eskildsen, who also plays on the album. Perhaps the reason is just that Haugshøj's time has arrived.

No matter what, the album feels like a perfect symbiosis between the new wave of youthful, lyrical jazz, represented by Eskildsen, whose self-titled trio album was one of last year's musical highlights, and the team of tried-and-true players like drummer Anders Mogensen and tenor saxophonist Jesper Lovdal. Mogensen elegantly drives the rhythm forward, his dancing touch with the sticks recognizable from his work with saxophonist Jerry Bergonzi, while Løvdal plays with melodic authority and follows every curve of the complex yet lucid compositions.

The no-nonsense approach to the music is underlined by the connection between Haugshøj and bassist Thomas Sejthen. While Haugshøj sets the pace with fast melodic flights and warm sounding chord progressions, Sejthen keeps the groove simmering. It never gets too hectic and the love of jazz tradition shines through. It's not a coincidence that the group plays a cover of saxophonist Sonny Rollins' "Pent-Up House" and Haugshøj has named his composition "Blues for Barney & Wes" after legendary guitarists Barney Kessel and Wes Montgomery.

While Haugshøj shows that he can play all sorts of complicated chord changes and fast lines, the important thing is that he tells stories -also slow ones like the ballads "She Amazes Me" and "Waltz for Oskar," the latter played on nylon-string guitar. With The Street Doctor, Haugshøj has arrived at a sound that is worth holding on to. Just like the album, this group is a keeper.