By ANDREY HENKIN
November 11, 2009
Sign in to view read count 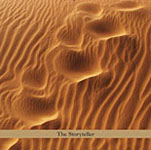 Despite the fact that alto saxophonist Uri Gurvich is Israeli and that his debut CD is on the Tzadik label (as part of its "Radical Jewish Culture" series), The Storyteller only sounds parenthetically Jewish. Yes, some of the titles are in Hebrew (translated as "The Builders," "I Believe" and "Chant" and a type of hummus) and the melodies are either pensive or ecstatic in that particular Jewish vein to which secular listeners have become accustomed. But there is more going on in the composing of Gurvich; a firm background in jazz and studies with saxophonists like Joe Lovano make this album as much a jazz album as a celebration of Gurvich's cultural background.

The leader traffics in strong melodies and compelling rhythms, regardless of their motific foundation. And certainly the improvisatory methodology on display by Gurvich, pianist Leo Genovese, bassist Peter Slavov and especially drummer Francisco Mela owe a greater debt to post-bop than pizmonim. And when the album features a second saxophone (Chris Cheek's tenor) and Genovese switches to Fender Rhodes for a pair of tunes, the aesthetic becomes highly reminiscent of early fusion experiments.

The problem with crossing over is the risk of alienating constituent groups. Let's hope neither jazz fans nor aficionados of "traditional" Jewish music write off Uri Gurvich's work as not pure enough. There is much for both camps to enjoy.