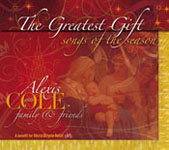 Award-winning vocalist Alexis Cole is getting ready for Christmas with The Greatest Gift. The disc features 14 tracks, including original songs and some Christmas favorites such as "Joy to the World," "Hark! The Herald Angels Sing," "Have Yourself a Merry Little Christmas," "Away in a Manger," and "Silent Night." The titles may be familiar, but Cole's unique interpretation turns the songs into jazz, blues and classical music—all highlighting her warm and rich vocals, so emotive they register in the keys of love and gratitude.

Inspiration for the disc's title came from her father, singer/composer Mark Finkin, who in 2007 performed at a recital called "The Greatest Gift" during his long-awaited college graduation festivities. It was around this time that Cole rededicated herself to the church and ultimately to music. Inspired by her religious feeling and the Christmas holiday, Cole is dedicating part of the sales from The Greatest Gift to the World Bicycle Relief Fund, an organization that raises money in support of disaster aid.

Standout performances include the disc's opening selection, an up-tempo instrumental of "Joy to the World"; "Jeanette Isabella/The Call," which includes original songwriting by Cole in a spiritual "call" to celebrate all children; a bluesy version of "God Rest Ye Merry, Gentlemen," featuring vocals by Cole and her father; "Hark! The Herald Angels Sing," done with a Caribbean twist; "Rise Up, Shepherd, and Follow," an African-American spiritual reinvented to include Indian music; and "The Happiest Christmas," a stripped-down, bare-bones performance with piano, violin and Cole's vocals.

Expressions of charity and goodwill are sprinkled throughout the disc, from the liner notes to the enhanced CD featuring videos of the World Bicycle Relief fund. It's one thing to reference the celebration of Jesus in an album title, and quite another to honor love and community with the album itself. The Greatest Gift is more than jazzed-up Christmas music—it's a gift that comes from within.

This review first appeared at jazzpolice.com.

Joy to the World; Jeanette Isabella/The Call; God Rest Ye Merry, Gentlemen; Hark! The Herald Angels Sing; Rise Up, Shepherd, and Follow; Have Yourself a Merry Little Christmas; Christmas Time Is Here (Prelude); Christmas Time is Here; What Child Is This?; O Come, O Come, Emmanuel; Away in a Manger; Silent Night; Happiest Christmas; Jesus is the Best Part of Christmas.