By GLENN ASTARITA
March 1, 2015
Sign in to view read count 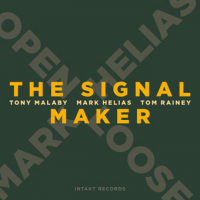 Celebrated bassist Mark Helias brings his all-star Open Loose trio back to the studio where compositions are reimagined, and heavy doses of improvisation are devised with a whole lot of cunningness. With these 13 pieces, the band infuses changeable and buoyantly rendered grooves, ideas, and detours, highlighted by the respective musicians' signature styles and striking intuitiveness. It's a manifold program that projects a sense of adventure via off-kilter deviations, gobs of counterpoint and a flock of shrewdly conceptualized twists and turns.

Helias' dual purpose attack is a prominent staple of this rapidly moving presentation. He contrasts saxophonist Tony Malaby in conjunction with drummer Tom Rainey's famously unique approach to drumming. Once again, Rainey's slap, dap and darting hits merge the structural components with off-center backbeats, sweeping fills, darting accents and rumbling, polyrhythmic breakouts. Yet as they say in the sport of boxing, styles make fights, and on this album stylistic tendencies and implementations add icing to the cake.

Ideas abound with creative minds on the loose. Variety is also a key factor, whether the band is bopping to a frothy, mid-tempo pulse on "Vocalise," or burning the midnight oil on the hard-hitting "Soliloquy." Nonetheless, many of these works feature Malaby's snaking and fiery lines as he toggles between the inside and outside jazz realm. But on "End Point," they delve into a subliminal motif and build steam, partly due to Rainey's crashing cymbals and pummeling rolls across the toms. Moreover, Helias' corpulent lines spring the group into an odd-metered funk groove, as Malaby builds tension with rough-hewn phrasings interwoven with temperate diversions.

The musicians generate warmth along with frisky, up-tempo swing and bop metrics while also bursting at the seams on the muscular and spiraling thematic developments, heard during "Motoric." And the final piece "Initialize," casts a brooding atmospheric, tinted with the bassist's scratchy arco-lines, leading to the trio's unorthodox sound-sculpting escapades. Hence, The Signal Maker hits the mark from a 360-degree realm of possible jazz-centric applications and broadly envisioned concepts, derived from the musicians collective experiences and lofty artistic motivations.