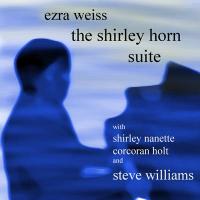 Pianist Ezra Weiss' love of Shirley Horn's music began in his youth, coming to fruition on lovingly crafted The Shirley Horn Suite, his tribute to the singer and pianist who died in 2005. A mix of originals and standards, his fifth album as leader is a sophisticated work, with some fresh compositions and terrific performances.

Weiss' previous albums have featured groups of six or more musicians. This is a traditional piano trio outing, performed with subtlety. Steve Williams was Horn's regular drummer for over 20 years, and his sensitive playing brings all of that long experience to these tunes. Bassist Corcoran Holt is still in his late 20s, but displays a mature approach to his playing, with some lyrical and romantic solos. Weiss makes the most of this excellent bass and drum duo, taking the lead role with skill and finesse, especially on the slower and more romantic numbers.

Weiss' arrangements of "I Love You Porgy" and "Estate" are simple, calm and lovely. Both tunes benefit greatly from this approach, the beauty of their melodies coming over loud and clear. Curtis Lewis' "The Great City" swings mightily, Holt's powerful bass driving things along, while Williams and Weiss trade phrases. Weiss' original tunes are strong, even in comparison to these exalted standards. "Blues For Shirley" is a loose-limbed, relaxed blues tune with a touch of Jon Hendricks and Harry Edison's "Centerpiece."

Like Weiss, singer Shirley Nanette is based in Portland, Oregon, and joins the trio on four of Weiss' original songs, singing with a passion that brings real humanity to the pianist's lyrics. Singing "I Wish I'd Met You" as if it was a torch song, it's certainly a song of longing, the lyric telling of Weiss' regret at never meeting the musician who meant so much to him. "Shirley Horn's Sound Of Love" features Holt's beautifully evocative solo, as well as Nanette's finely crafted vocal, while she sings "Now That You Mention It" with a more humorous touch, as befits its lighter and more optimistic take on romance.

The Shirley Horn Suite is a fine album and a fine tribute. Weiss' decision not to simply revisit Horn's own recordings is a wise one, for his own writing, and the performances of Nanette and the trio, invoke Horn's spirit with respect. Hopefully this is the debut, and not the sole recording from this line-up.

I Wish I'd Met You; The Great City; Shirley Horn's Sound Of Love; Blues For Shirley; I Love You Porgy; Now That You Mention It; Estate; Something Happens To Me; May The Most You Wish For.