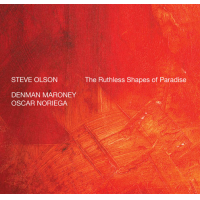 From the opening bell, which sounds for all the world like that which signals the beginning of a Zen meditation session, The Ruthless Shapes of Paradise creates a wondrous, ethereal and all-encompassing time/space continuum all of its own.

Drummer/percussionist Steve Olson, whose previous album, Conversations explored free improvisation between himself and various other instrumentalists, had been deeply exploring a number of 20th century classical composers, and seemed to be particularly moved by the music of Morton Feldman (see here for more info and here (Piano And String Quartet, 1985) for an example of his late work).

"Getting into" the music of Feldman can, of course, be extremely daunting or equally enrapturing, but there can be no doubt about the effect his music has upon the space and time in which the listener finds himself. It is Feldman's creation of enormous spaces and the importance placed upon the individual notes as sounds which attracted Olson and is at least part of his intent which he brought to the recording studio.

For musical partners of this journey into the unknown, Olson asked hyperpianist Denman Maroney and reed man Oscar Noriega, with the only thing said to them before the session being, "I'd been listening to a lot of Feldman's music, and was feeling the need for space."

The result is simply magnificent and the depth of communication between the players astounding. Time has no meaning, neither per track nor the for the record as a whole. Nevertheless, there is immediately audible and understandable development of musical ideas (or sometimes just sounds) through time; the same time, which, of course, has no meaning with respect, at least, to musical rhythm. This music creates different, and arguably deeper, emotions through its manner of moving while standing still and its mixing of sounds and notes.

There are no clear leaders or followers in this music. However, Noriega, playing the only single-line instrument, is perceived to be in front, and, given the range of sounds he gets from his reeds, including harmonics, almost steals the record. Maroney does play much "normal" piano, but his hyperpiano techniques, which include not only prepared-piano sounds, and keyed notes altered by touching the string inside the piano with some object, but also playing the strings inside with objects, set him apart and give the music its special sound.

For his part, Olson most of the time comments on the proceedings, but occasionally does react to some figure and take the lead.

The third track, "Skittering," sounds most like Feldman, at least in its opening and closing sections, but each track has its own personality, its own flow and its own logic. There are many passages of sheer beauty or emotion, and others which are almost terrifying.

If a jazz recording in general, because of its improvisatory aspect, is the capturing of ephemera, then The Ruthless Shapes of Paradise is the capture of the gossamer wings of the shadow of the never-to-be-repeated. Anyone who values high musicianship and who has no fear of "listening without a net" ought to experience what Olson, Noriega and Maroney have produced.

Rothko; Crunchy Grumbles; Skittering; Behind the Red Door; Give My Regards to Eighth Street; Rest In Peace Ornette; Monastery.