I wish I could like Point of Departure. I feel like I’m missing something that the smarter kids in class get. 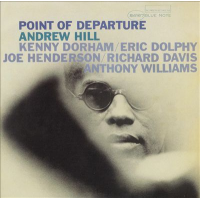 I have put off writing this blog post as long as possible. For three weeks, I've been listening to Andrew Hill's Point of Departure and contemplating what I can say that isn't blatantly subjective and negative.

I honestly thought I might appreciate this, even though I don't generally like avant-garde jazz. Almost everyone seems to love this record. Let me count the ways:

The 1996 version of The Penguin Guide to Jazz on CD gave Point of Departure its highest honor, a perfect rating, or crown, designating it a record "for which the authors feel a special admiration or affection."

Allmusic gives Point of Departure its highest ranking, five stars, and says Andrew Hill "is perhaps best known more for this date than any other in his catalogue—and with good reason."

What am I missing?

Going in, I knew that Andrew Hill was famous for his complex compositions. Many fans compare him to Thelonious Monk. I don't hear it. I'm a big Monk fan. I know that that Monk's angular, herky-jerky songs aren't everyone's cup of tea. So complexity doesn't throw me. Still, Point of Departure is a hard listen.

Yes, the songs are off the beaten path. That's not a deal-breaker. But Eric Dolphy is. To my ears, he ruins everything he plays on. That's a wildly subjective judgment, I know. Many fans adore Dolphy. I find him intentionally atonal and screechy. If he's on a CD, I probably will detest it. Sorry.

Joe Henderson on tenor is usually fun and frantic. Here, he pushes the envelope so far that some solos are just not enjoyable or interesting. Kenny Dorham's trumpet is reliably boppish and hard-charging. But put the three horns together and they become a disjointed mess.

Strangely, of the five cuts on Point of Departure, the one that intrigues me most is the least conventional. "Spectrum" is nine minutes of disconnected passages. It starts conventionally with unison horns and a Monk-ish piano solo, then stops abruptly. Drum roll, then a new theme, a whiny Dolphy alto and weird horn interplay. Stop again. Bass solo, leading eventually to a funky riff—and then each instrument takes a few seconds to play what sounds like an orchestra warming up. A drum solo, then the opening theme again, and then it's over. Very weird.

The closest thing to a real "song" is the closer, "Dedication," a funeral dirge that is somewhat moving.

I wish I could like Point of Departure. I feel like I'm missing something that the smarter kids in class get. But this just doesn't connect. No melody, little rhythm, no joy. Yuck.