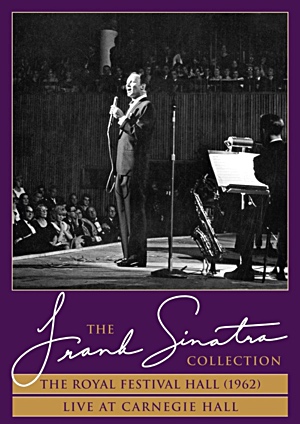 The first DVD in this series combines full-length shows from two of the world's most famous concert halls, one on each side of the Atlantic: The Royal Festival Hall, recorded during Sinatra's 1962 world tour to raise money for children's charities; and a 1980 performance following the release of his Trilogy album (1980, Reprise) captured Live at Carnegie Hall.

Royal Festival Hall presents Sinatra with an acoustic sextet led by his longtime pianist Bill Miller. Working with the smallest ensemble in this series, he connects more intimately with this music, its nuances, and his audience, than the other performances. The anticipation and energy remains palpable 55 years later as he strides onstage and builds up the opening put down "Goody Goody." The rhythm section dives in headfirst, with interplay between the vibes (Emil Richards), drums (Irv Cottler) and pianist Miller creating a melodic and rhythmic sheen, with Sinatra crackling through the lyrics sharp and crisp, incisive as a scalpel.

Sinatra duets with electric guitarist Al Viola for a breathless "Night and Day," then Harry Klee joins on flute for a portrait of "Autumn Leaves," melancholy and stark, the trio drawing melodic lines into leafless tree limbs of bare emotion.

"Every so often you get, you might say, lucky with a song in our business, and about five years ago I did just that very thing," he explains to introduce "All the Way" (which won the 1958 Academy Award for Best Song [from The Joker Is Wild]). Sinatra breathes into "All the Way" all the blood and heart and wonder and hurt and other magics of love that can be expressed in music. "It's really a marvelous song," he confirms to its finishing applause.

Miller rolls out a classy yet boozy piano blues underneath Sinatra's cool and weary vocal in "One for My Baby," each delivering their respective equivalents of its lyric, "I'm feeling so bad, can't you make the music easy and sad?" "This is the kind of song that's generally done in a small bar in the wee hours of the morning," he quips. "And, more than usual, you'll find that it's usually sung by a young man who's been sopping up the sauce for about four or five hours." This duo returns for the encore "Old Man River," a powerhouse Sinatra concert staple for years.

A much more wise and worn artist walks onstage to perform Live at Carnegie Hall with an orchestra in June 1980, painting with broader strokes to fully project throughout larger venues, playing to the back rows in addition to his muse. This performance followed the release of Sinatra's Trilogy album (1980, Reprise) and showcases, among its other songs, his landmark "Theme From New York, New York."

Sinatra jumps right into "I've Got the World On A String" (which, at this point of his career, seemed quite true); the horns in this larger ensemble swing out brassy, sassy rhythmic counterpunches, and his full-throated, rip-roaring ending is nothing short of majestic. He chews up and spits out "I've Got You Under My Skin" in a slugfest with the horns, too.

Then Sinatra seems to float like a cloud on "I Can't Get Started," with Charles Turner playing Harry James' trumpet sound, and to quietly disappear with guitarist Tony Motolla in their dual rumination on "Send in the Clowns."

But his meandering reflection through of "The Gal That Got Away / It Never Entered My Mind" is peerless, gracefully enhanced by Nelson Riddle's and Don Costa's arrangements. "I'd like to take a second to explain saloon songs to you," he explains. "Saloon songs are songs of unrequited love and sadness." He pauses to light up a smoke, collects all his pain into a blues bag, and then pours it all out.

"I think that this engagement that we're having right now, at this moment, has been the most rewarding and the most exciting of my entire career in show business," he suggests to the crowd later in this set.

The Royal Festival Hall (1962):
Goody Goody; Imagination; At Long Last Love; Moonlight In Vermont; Without A Song; Day In, Day Out; The Moon Was Yellow; I've Got You Under My Skin; I Get A Kick Out Of You; The Second Time Around; Too Marvelous For Words; My Funny Valentine; In The Still Of The Night; My Blue Heaven; April In Paris; You're Nobody Till Somebody Loves You; They Can't Take That Away From Me; All The Way; Chicago (That Toddling Town); Night And Day; Autumn Leaves; I Could Have Danced All Night; One For My Baby (And One More For The Road); A Foggy Day; The Lady Is A Tramp; Ol' Man River; You Make Me Feel So Young; Nancy (With The Laughing Face); Come Fly With Me.

Live at Carnegie Hall (1980)
I've Got The World On A String; The Best Is Yet To Come; The Lady Is A Tramp; When Your Lover Has Gone; This Is All I Ask; I've Got You Under My Skin; Summer Me, Winter Me; Street Of Dreams; Medley: The Gal That Got Away / It Never Entered My Mind; I Can't Get Started; Send In The Clowns; Come Fly With Me; Guess I'll Hang My Tears Out To Dry; You And Me; The Song Is You; Theme From New York, New York.