By Mark Sullivan
September 27, 2017
Sign in to view read count 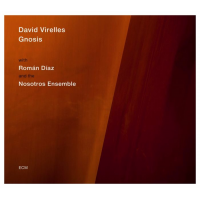 Cuban-American pianist/composer David Virelles continues the exploration of Afro-Cuban musical traditions begun with his first recorded collaboration with vocalist/percussionist Roman Diaz on Continuum (Pi Recordings, 2012), continuing through Mbókò (ECM, 2013) and Antenna (ECM, 2016). He uses "gnosis" to refer to ancient collective knowledge, and this music is about the intersection of cultures—contemporary improvisational language and Cuban sources, especially the sacred Abakuá percussion ensemble.

There are over a dozen instrumentalists and vocalists employed, but they are mostly broken up into various small ensembles: the concert premiere was billed as "futuristic Afro-Cuban chamber music." So it is definitely not the massive ensemble sound one might expect at first glance. The set opens with "Del Tabaco Y El Azúcar," a deliberate pianistic exploration accompanied by Thomas Morgan's double bass and an eclectic percussion ensemble. "Fitití Ñongo" goes into more rhythmic territory, and then "Lengua I" cuts the group size back for the first of several piano solos. "Erume Kondó" is the first track featuring traditional percussion and chant from Díaz, followed by the more extended "Benkomo."

From there the texture continues to shift. Sections with the full ensemble (often with Allison Loggins-Hull's flute in the lead) such as "Tierra" and "Visiones Sonoras" alternate with more vocal selections, another feature for Morgan's bass with percussion ("Nuná"), and solo piano. In fact Virelles closes out the set on piano with two unaccompanied tracks ("De Cuando Era Chiquita " and "De Coral"). Yet the entire program maintains a consistent tone, simultaneously ancient and contemporary: a ritual for the modern world.