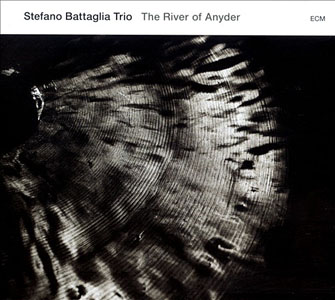 After three ECM recordings that finally brought greater international attention to the eclectic breadth of Stefano Battaglia's nearly two-decade career, the Italian pianist turns to a format steeped in jazz orthodoxy for The River of Anyder . But those familiar with his career, if only his ECM dates—the freer terrain explored with two trios on Raccolto (2006); paying tribute to the multi-disciplinary Pier Paolo Pasolini with two discs of more structured music for quintet and sextet on Re: Pasolini (2007); and returning to largely free territory, but this time in a duo with percussionist Michele Rabbia, who brings electronics into the mix, on Pastorale (2010)—will know to expect the unexpected from Battaglia's piano trio.

Battaglia hasn't left his conceptual focus behind, either, The River of Anyder referencing Sir Thomas More's classic Utopia (1516), through which the titular river runs. But if Battaglia's inspiration is centuries old, his music is timeless. There's something about the album's delicate yet relentless lyricism that harkens back to ECM's emergence in the 1970s, when pianists such as Keith Jarrett, Art Lande and Bobo Stenson were pushing forward with free-spirited melodism predicated on unfettered communication. And if the opening "Minas Tiriyh" and title track are delivered with empathic rubato ebb-and-flow, later tracks such as the Middle Eastern-tinged "Ararat Dance," its serpentine melody doubled by Battaglia and bassist Salvatore Maiore, demonstrate the trio's ability to work with more fixed tempos.

Still, even when playing in time, drummer Roberto Dani's approach is as much about color as it is pulse, though the middle section of "Ararat Dance"—where the trio works a persistent vamp and Battaglia begins to open up with greater bursts of focused virtuosity—would not succeed as it does, were it not for Maiore's spare but specific choices and Dani's light but lithe rhythmic support. The trio revisits the same structure on "Ararat Prayer" later in the set, and while the tempo is reduced and the form is expanded, the musicians ultimately explore a similar vamp, but at a considerably lower temperature.

The trio continues to probe duality on "Bensalem" and "Return to Bensalem"—though, curiously, the latter precedes the former in the set. Unlike "Ararat," however, both versions are taken at roughly the same tempo, with "Return" offering a briefer, eight-minute glimpse that expands beyond twelve minutes on its partner track later in the set.

One of ECMs signature has been the inclusion of multiple takes/variations that reveal, through comparison, an artist's fundamental markers. In the case of Battaglia and his trio—returning from one of Re: Pasolini's two discs—it's a controlled freedom, where the music is never restrained, yet never approaches full boil. But it's that very quality—a pervasive tension amidst its gentle, sometimes pastoral playing and countless haunting melodies—that makes this one of the year's most beautiful piano recordings. An undercurrent of gentle push-and-pull, flowing beneath its seemingly endless wellspring of haunting melodism, gives The River of Anyder its depth and weight, even as its diaphanous interaction suggests an evolving language from Battaglia and his elegantly empathic trio.