Home » Jazz Articles » Giacomo Gates: The Revolution Will Be Jazz

Giacomo Gates: The Revolution Will Be Jazz

By James Nadal
September 29, 2011
Sign in to view read count 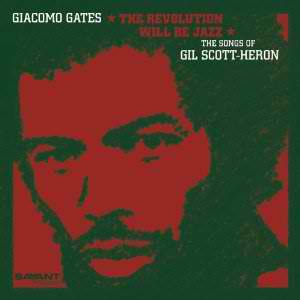 An omnipresent cloud persistently hangs over any tribute album—that the music will be compared to the original. Even though this might seem unfair, it's a fact. Knowing this, jazz vocalist Giacomo Gates dares to venture into the distinctive songbook of Gil Scott-Heron with The Revolution Will Be Jazz, and comes out the other side with a remarkable record.

Gates cautiously handpicked the songs from Scott-Heron's repertoire, and wisely does not attempt an imitation or duplication, but performs collective interpretations with his own characteristic baritone styling and phrasing.

The record opens with the swinging "Show Bizness," where Gates displays a confidence which permeates throughout the record. This vocal attitude is highlighted on the classic "Lady Day and John Coltrane," given a laidback treatment with room to set the proper mood, allowing the band to stretch out. The humorous and satirical tracks, "Legend in his Own Mind" and "Madison Avenue," work well with Gates, who delivers as if in a live setting, with ease and comfort.

Gates mentions in the liner notes that the songs "Gun" and "Winter In America," realistic views on modern social problems, are just as pertinent and relevant today as when first released. He takes on these two with a vengeance and maintains the vitality of the message, a key element in Scott-Heron's writing. The sincerity in "New York City," with its autobiographical connotations, might just be the pivotal song on the record where Gates really shines, crooning the subtle intent of the lyrics.

It took a lot of courage to decide to perform an entire record of songs by Scott- Heron, a genuine visionary and revolutionary figure in music. Gates was approached by producer Mark Ruffin for this project, based on his ability to convey the songs with authenticity, originality, and due respect to this legend of a songwriter. The Revolution Will Be Jazz displays all of these requirements and is a verification of just how important this music is.

Show Bizness; This Is A Prayer For Everybody to Be Free; Lady Day and John Coltrane; Legend In His Own Mind; Madison Avenue; Gun; Winter In America; Is That Jazz; New York City; It's Your World.