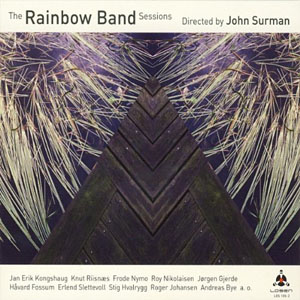 It's been nearly two decades since British saxophonist/clarinetist John Surman last did a large ensemble disc, with the exception of Free and Equal (ECM, 2003), which teamed the duo of Surman and drummer/pianist Jack DeJohnette with the London Brass ensemble. But the last time Surman did a swinging session beyond a quartet was The Brass Project (ECM, 1993), and that was in collaboration with Canadian expat John Warren, another longtime Surman partner dating as far back as How Many Clouds Can You See? (Vocalion, 1969) and the entirely Warren-penned Tales of the Algonquin (Vocalion, 1971).

All of which makes The Rainbow Band Sessions even more special. This time, Surman is listed as "director," even though this mini-big band record, featuring 14 players configured into a variety of nonets, still weighs heavily in favor of the absent Warren, who contributes half of the eight-song program, along with two Surman charts, one by largely forgotten British composer Eddie Harvey and a simmering version of "Off Minor"—a well-covered Thelonious Monk title, with Knut Riisnæs delivering a gritty tenor solo and pianist Erlend Slettevoll playing with suitable idiosyncrasy.

The Rainbow Band Sessions has plenty more to recommend it. For those who think of Norwegian jazz in terms such as Nordic cool, Surman—now living in Oslo with his wife, sublime singer Karin Krog—proves there's plenty of jazz tradition to be found in the land of the fjords. A number of familiar Norwegian musicians prove their mettle in a vibrant program that swings from start to finish, whether it's drummer Andreas Bye, of pianist Espen Eriksen's lyrically understated trio, supporting the buoyant opener (Warren's contrapuntal blues "Bedrocks Inn") with unexpected power and firm propulsion, or altoist Frode Nymo, who winds his way through Harvey's mid-tempo "The Wizard" with unshakable (and potent) aplomb.

The session, as the title would suggest, took place at Oslo's legendary Rainbow Studio, where (between its two locations of the past few decades) a bevy of legendary ECM titles have been recorded. This time, heralded engineer Jan Erik Kongshaug is behind the desk, but also wears the producer's hat. What's lesser known is that he's also a fine guitarist (with two albums as a leader), and while he's not given any solo space, his mainstream disposition makes him a great addition to the ensemble throughout, but in particular on Surman's "Going for a Burton," last heard on the saxophonist's Brewster's Rooster (ECM, 2009), but here reworked for a larger group, with Kongshaug's warm-toned hollow body leading the thematic frontline.

Surman is his characteristically egalitarian self when it comes to assigning solos, but it's a real treat to hear him cutting loose on baritone ("Bedrocks Inn" and Warren's balladic closer, "Longing") or soprano (on Warren's bolero-driven "My Sketchy Spanish" and the fomenting heat of Surman's own "One Last Waltz"). Brewster's Rooster aside, Surman's recent ECM albums have been largely pensive and introspective, but The Rainbow Band Sessions makes abundantly clear that not only can he still pull out the stops when he wants to, but he's got plenty of players in his relatively new home with whom he can do it.

Bedrocks Inn; The Wizard; Lopsided; Going for a Burton; My Sketchy Spanish; Off Minor; One Last Waltz; Longing.