Quincy Jones And His Orchestra: The Quintessence 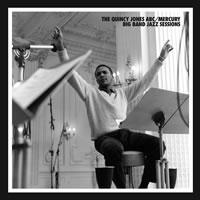 As the who's who of the entertainment and humanitarian aid worlds prepares to fete Quincy Jones on his 75th birthday (he was born March 14, 1933), Universal's Impulse! Records also takes part in the celebration with the reissue of The Quintessence.

Recorded in late 1961 as an offshoot of the Free and Easy Broadway show, the band features roughly the same big band personnel Jones had assembled in New York for the show's initial European dates. Following the show's unfortunate demise in Paris, he attempted to coordinate a pan-European tour of this group of "vagabonds," as he amicably refers the disparaging bunch in his autobiography Q (Harlem Moon, 2001), "just gigging on pure ass" and grappling financial assistance from label head and future boss Irving Green, the founder of Mercury Records.

In the end, he was forced to sell his music publishing to pay lenders and band mates, fly them back to the States and come to terms with the Internal Revenue Service. From the original Free and Easy lineup, saxophonists Phil Woods and Jerome Richardson, bassist Buddy Catlett, pianist Patricia Bown, trombonists Melba Liston and Billy Byers, hornist Julius Watkins and trumpeter Clark Terry stayed on board upon the group's return to New York and are featured herein.

On "The Quintessence," a Grammy Award-nominated chart and composition, one is greeted with pads of lush French horns and trombones voicings, which provide silvery accompaniment to Phil Woods' pungent sound as he toys with the ballad melody. "Robot Portrait," an angular theme penned by Byers, closely resembles John Coltrane's "Blue Train," but diverges to a backbeat-driven, shuffle blues during the solos.

Following Jones' Basie-esque arrangement of Benny Golson's "Little Karen," the band launches into a hard-swinging version of "Straight No Chaser," with its gripping, ending shout chorus. It is undoubtedly the most exciting track of the album. Then, he reverts to his Basie roots with his own "Hard Sock Dance" and "The Twitch," a cool and easygoing tune penned by Byers that ends the 31-minute program.

Should there be people out there still accusing Jones of "selling out," this album, as well as others recorded with this same ensemble, will most probably change their opinion, reminding them of this American popular culture icon's deep jazz roots and all he did for the genre artistically and entrepreneurially. Happy birthday Q!