Nixon Mohohlo & The Collective Heads of Knuckle: The Queen of Complaints

BY KARL ACKERMANN
April 1, 2021
Sign in to view read count 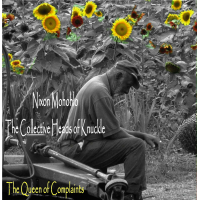 For good or bad, drummer Nixon Mohohlo has worn his heart on his sleeve for most of his musical career. Following a brief experience with monastic silence he recorded an album-length version of John Cage's "4'33." It met with outrage and was pulled from the market. In 1999, he recruited Dutch percussionist Horst Van Clutter for an ineffective all-percussion tribute to violinist Jean-Luc Ponty. Undeterred by wide-ranging failures, the conceptual drummer had an unconventional idea for which he gathered like-minded colleagues. He scoured the New York City subway, Washington Square Park, and the lower East Side for untapped talent. Finding no one, he instead formed The Collective Heads of Knuckle in 2015. Essentially a touring band, The Queen of Complaints is their debut recording.

Mohohlo last appeared as a member of Doris Drain's Big Band on Soon Enough, She Stopped Writing (Bad Business Records, 2012). The Collective Heads of Knuckle draws from that band of studio musicians except for pianist Trout Farmer who played with his saxophonist brother, Ainsley "Rhubarb" Farmer in the group The Flying Sundown Apparatus. The Queen of Complaints opens with the improvised "Tales of Headless Joe Arbitrage." Bassist B. Russells Prouts starts the piece with a lengthy exhibition of false harmonics. Trumpeter Schwinn Martin joins in with guttural bleats before Mohohlo adds his trademark thwacking. Farmer, who leads the duo Recession Quartet, is featured on the brief, rhapsodic "Bless the Attachment" which serves as the intro to "The Malthusian Cycle Shop." The three-part suite places the first and third movements as bookends around the classic blues piece "Kansas City Cheese." "Have We Learned Nothing From This?" does not utilize the current band. Here, Mohohlo splices together samples from six of his previously recorded compositions. It's a debacle. The album closes with another suite, "Five Tiers of Redemption" which Mohohlo based on his misperceptions of frequent flyer programs. Four of the sections feature solos from each of the band members and the finale, the full quartet.

Mohohlo's apparent remedy to a string of abysmal projects is to throw everything at the mic and hope that something sticks. Something does, but the walls, floor, and mic are still an unmitigated mess. His bandmates are more sycophantic than symbiotic, bowing to Mohohlo's ill-conceived ideas with little in the way of independent thinking. That said, The Queen of Complaints is all good fun and no one gets poked in the eye.