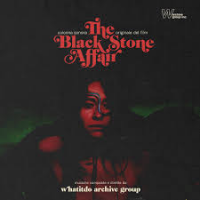 Great music recorded in the 1960s and 1970s, never previously released and thought to be lost forever, continues to be unearthed. In 2018, there was John Coltrane's Both Directions At Once: The Lost Album (Impulse!). In 2019, there was Miles Davis' Rubberband (Warner Bros). Now, in 2021, comes another historic discovery: the long-lost soundtrack of visionary Italian film director Stefano Paradisi's masterpiece, The Black Stone Affair. An adventure-western-noir starring Sophia Guccio, Bruno Serafini and Luigi Nicolosi, and introducing Paradisi's personal masseuse, Rita Chevrolet, the movie was shot in Rome, Budapest, Paris and Reno. Its soundtrack was composed and performed by Gruppo Whatitdo Archive, a breakaway faction of Ennio Morricone's Gruppo di Improvvisazione Nuova Consonanza.

Unfortunately, the loss of the film in a fire the night before it was due to be premiered at the Cannes Film Festival in 1974, meant it was never shown in public. But people who worked on it said that it was destined to put Paradisi on the map alongside the likes of Federico Fellini and Michelangelo Antononio. Tragically, Paradisi never made another film: in 1975 his body was found on a beach at Ostia outside Rome. It had been run over multiple times by his own car. The assassins have never been identified.

Miraculously, in 2020, the master tape of The Black Stone Affair's soundtrack was discovered in a bordello in Las Vegas. How it came to be there, nobody knows, and the person who found it, who is believed to be a high-profile movie producer, has chosen to remain anonymous. Nicola Conte is rumoured to be making an entire album (working title Jet Sounds Nova) around it. Meanwhile, the original recording is being released on Milan-based label Record Kicks on April 9 2021.

Nota Bene: This review is based on alternative facts contained in Whatitdo Archive Group's press release for the soundtrack album. The movie never existed. But the album absolutely does. You can get a taste on the YouTube clip below.