The Jeremy Lyons Ensemble: The Promise Of Happiness

By ROGER FARBEY
December 7, 2016
Sign in to view read count 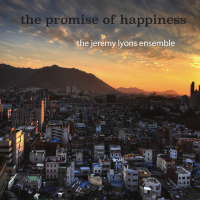 Saxophonist Jeremy Lyons took a degree in jazz studies from Leeds College of Music, later decamping to London where he undertook further study at Middlesex University and subsequently forming his own quartet and trio with fellow Middlesex alumni Hans Koller and Dave Whitford. He now leads his own London-based quartet, playing original charts and lesser-known modern standards, with Ben McDonnell on guitar, Vicky Tilson on double bass and Buster Birch on drums. This quartet recorded his 2013 debut album Vestige, which is now succeeded by this ambitious eleven piece big band recording, populated by some of the finest musicians currently playing on the British jazz scene.

The opener, "Tattletale" is a labyrinthine medium to fast paced number adorned by a soaring trumpet solo from Noel Langley and a sumptuously rich score. Dave Whitford, first to solo on the brisk "New Openings," his resonant bass accompanied here by guitar and drums, is swiftly followed by the satisfyingly strident tones of Tom Harrison on alto sax.

Lyons himself gives an articulate and lengthy tenor solo on the reflective "Shinbu," the ensemble passages toward the end recalling some of the more restrained arrangements of the irrepressible Clarke Boland Big Band. After a quiet opening, "Disquiet" transforms into a vaguely Latin-tinged number featuring solos by Patrick Hayes on trombone and Buster Birch on drums.

The lively "Upward Lift" shares some of the dulcet, multi-layered qualities, to be found in compositions of the late Kenny Wheeler, whereas "So Long, Suwon" is a slower, more ruminative piece with an elegant flugehorn solo by Yazz Ahmed. The title track benefits from lithe solos, first from Lyons on soprano sax, followed by Ben McDonnell on guitar and an exciting ensemble finale. The closer "Old Haunt Revisited" features a piano solo by Hans Koller and a freewheeling, yet tight arrangement. Lyons should be congratulated for bringing together some consistently solid arrangements to his eight self-penned imaginative compositions presented here.