By Karl Ackermann
December 7, 2016
Sign in to view read count 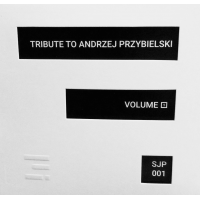 If the Polish trumpeter and composer Andrzej Przybielski (1944-2011) was under-recognized in his native country, he has been all but unknown in the West. Though he had established his early career in traditional jazz groups, he later became a mythical figure on the Polish avant-garde jazz and free jazz scenes. Later in his career, Przybielski entered a phase that combined the influences of native folk music, improvised jazz, electronics and punk. With more than fifty albums in his portfolio, Przybielski had recorded with top tier talent such as Marcin Oles, Bartlomiej "Brat" Oles and Tomasz Stanko.

Another excellent polish trumpeter/composer, Maciej Fortuna took on the challenge of bringing Przybielski's work—and new compositions inspired by the same—to light, in this tribute collection. Based on the ..."Vol. 1" in the title, this is the first of a series and it is promising. The assembled group consists of Fortuna and five other Polish trumpeters (Stanko, notably missing), guitarist Jakub Kujawa, bassist Grzegorz Nadolny and drummer Grzegorz Daron.

In the cases of "Afro Blues" and "Hey Jack" the pieces were based around Przybielski's work, "Theme Afro." Both are stirring, dramatic improvisations with sharp accents from the rock-oriented guitar of Kujawa. "Free II"—part of a dispersed set of three Przybielski motivated improvisations, sounds fairly structured but is nonetheless an inspired piece. Along with "The Ark" it is one of the pieces that make Tribute to Andrezej Przybielski Vol. 1 a very worthy effort.

The closing composition, "Call in Brain," is a bit of a challenge. At more than twelve minute, the music is interwoven with spoken word excerpts from Przybielski. The historical significance of these passages, which are in the Polish language, is likely to be lost on many and so, adds little to the widespread appeal of the album. That said, it's clear that Przybielski is a composer worthy of deeper analysis and Fortuna is a good conduit for relaying the artist's work.