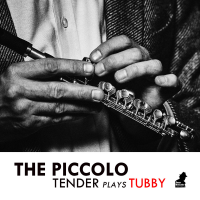 Saxophonist, flautist and vibraphonist Tubby Hayes, who died at the unconscionably young age of 38 in 1973, was that rare thing among the first generation of British hard boppers—a musician who was taken seriously by the hippest American musicians and audiences. He visited New York in 1961 and 1964 for seasons at the Half Note, and Los Angeles in 1965 for a run at Shelley's Manne-Hole. A passionate player, a gifted composer and a virtuoso on his instruments, Hayes first encountered his life-long friend and mentor Ronnie Scott when, aged just 15, he asked Scott if he could sit in with his band. "This little boy came up, not much bigger than his tenor sax," said Scott years later. "Rather patronisingly I suggested a number and off he went. He scared me to death."

In an obituary for Hayes, Scott was quoted as saying he was "the best jazz musician this country ever produced." People say things such as this in obits, but Scott was in the right ballpark.

The Piccolo: Tender Plays Tubby is a tribute to Hayes by saxophonist and flautist Ed Tenderlonious Cawthorne, one of the new generation of musicians who have since around 2015 been breathing fresh life into the London jazz scene. Cawthorne plays piccolo, flute and soprano saxophone on the disc and the band is rounded out by five of his contemporaries, each of them burning brightly. The EP has a running time of just over twenty minutes and revisits four well-loved Hayes pieces: the headlong "Down In The Village" and mid-tempo "In The Night" from Down In The Village (Fontana, 1963), the gentler "Trenton Place" from Mexican Green (Fontana, 1968) and the Arabic-sounding "Raga" from Tubbs' Tours (Fontana, 1964).

With track playing times of around five minutes, there are obviously no lengthy solos. Concision rules. Cawthorne turns in a nice flute chorus on "Down In The Village," followed in turn by Nick Walters on trumpet and Hamish Balfour on piano. Balfour also plays vibraphone on the album but, perhaps wisely, does not solo on the instrument on this track (check Hayes doing so on the YouTube clip below). "Trenton Place" and "Raga" are piccolo features and "In The Night" showcases soprano saxophone.

There is a great backstory attached to The Piccolo. When he passed—from a heart condition exacerbated by alcohol and heroin use—Hayes' possessions were stored in a trunk by his partner Liz Gronland. Among the tapes, LPs, photos and miscellaneous personal effects was a piccolo. Hayes, who augmented his income by recording TV and radio advertising jingles, had bought it for this line of work, but never used it on a jazz session (so far as is known). Gronland herself passed in 2015, bequeathing the trunk to some close friends. To cut to the chase: Cawthorne was offered the chance to record with the instrument and, naturally, jumped at the opportunity.

No-one has yet to recapture the thrill of hearing Hayes in full flight and it may be that no-one ever will. But Cawthorne and company give it their all and make a fine fist of it. A lovely disc.

Down In The Village; Trenton Place; Raga; In The Night.