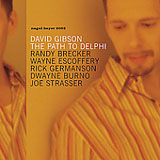 Some jazz fans are constantly on the lookout for innovation and look down their noses at albums that are less than revolutionary—or even evolutionary, for that matter. But the truth is that within the broader purview of jazz there's plenty of room for works that are less ambitious but no less engaging. Sometimes a good story well told should be taken on face value, rather than looking for deeper meaning and significant invention.

Such is the case with trombonist David Gibson's second release on Nagel Heyer, The Path to Delphi. Possessed of a gorgeously warm tone and confident dexterity reminiscent of J.J. Johnson, Kai Winding, and Curtis Fuller, Gibson writes from a modal-based post bop aesthetic. His compositions don't necessarily stand out; it's unlikely that they'll ever become often-covered classics. But the nine original pieces that make up The Path to Delphi are nevertheless nicely swinging vehicles that give Gibson and his sextet plenty of opportunity to stretch out and explore a mainstream vibe that holds one's attention from start to finish.

With an ensemble that includes three other relative newcomers (saxophonist Wayne Escoffery, pianist Rick Germanson, and drummer Joe Strasser) and two more seasoned veterans (bassist Dwayne Burno and trumpeter Randy Brecker), Gibson has fashioned a group that navigates with authority and complete commitment, despite the relative greenness of some of its members. Escoffery has two of his own releases out on Nagel Heyer, including last year's shimmering Intuition, and his own exploration of a post-Coltrane sensibility is in perfect sync with Gibson's own disposition. Little needs to be said about Brecker, who's nothing if not a team player. His breadth of field and depth of vision enhances every session he's on, yet his almost legendary status never overshadows the younger players.

The three horn lineup—trombone, trumpet, and soprano saxophone (Escoffery sticks solely to the high horn for this set)—makes for a rich and full-bodied front line. Whether on the gently balladic "Hestia's Egress, the lightly swinging "Persephone, the more brooding "Serpents of Hera, or the Spanish-tinged "Icarian Sea, the group echoes a '60s Blue Note vibe, perhaps not as cerebral as saxophonist Wayne Shorter's work, but with some precedence there nonetheless.

Neither forward-thinking enough to rattle any cages nor so backward-looking as to be labelled strictly traditionalist, Gibson's The Path to Delphi is, quite simply, a consistently enjoyable set of well-written tunes, well-played by artists ranging from the established to the emergent. It's too early to tell whether or not Gibson will develop his voice in a more distinctive fashion, but until then he could do far worse than release honest, unassuming, and thoroughly compelling albums like this one.