By Mark Sullivan
April 4, 2022
Sign in to view read count 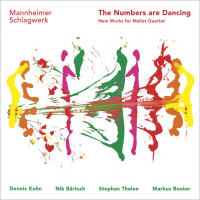 The percussion ensemble Mannheimer Schlagwerk used Steve Reich's 2009 composition Mallet Quartet (Nonesuch Records, 2011) as a template for these commissioned compositions. Four mallet instruments form the core of all of this music (the basic instrumentation is two marimbas and two vibraphones), but each of the composers takes their own path (and in some cases expands the instrumentation a bit). The composers are all known for a musical style that favors rhythmic repetition, in a way that can recall Reich's music, but they typically lead ensembles which feature their own playing.

Mannheimer Schlagwerk's artistic director Dennis Kuhn opens the album with "Leon's House (Epitaph for a friend)." In this context he is a bit of a wild card, since most listeners will be unfamiliar with him as a composer. But he has the advantage of intimate familiarity with the ensemble, and his piece is beautiful and idiomatic. It starts out slowly, as is fitting for a memorial, including a lovely bowed section, before building to a somewhat knotty conclusion. Nik Bärtsch's Ronin is known for its minimalist "zen funk." Here Bärtsch applies the same thinking to the percussion ensemble with "Seven Eleven." The title refers to the rhythmic structure of 11/4 which eventually splits off into 7/4. But, as usual, it feels completely natural, a testament to the familiarity with such odd rhythms shared by performers and composer alike.

Stephan Thelen's compositions both expand the group beyond a quartet. "Russian Dolls" adds organ and clarinet, giving a greater range of sustained tones (although the organ is also used rhythmically, which is a nod to Reich's practice). "Parallel Motion" adds two percussionists, producing a layer of activity beyond the mallet instruments. The double-time feel builds to a massive climax. Markus Reuter's "Sexgott" uses the mallet ensemble to revisit his own sound world, in which the instrumental parts combine to create a whole which is more than the sum of its parts. His approach employs less rhythmic drive than most of the other pieces on the album, but the result is a different, subtle group sound. The trio of short pieces (named for heavenly bodies) brings the program to a gentle conclusion.