The Clayton Brothers: The New Song And Dance

By Dan Bilawsky
December 31, 2010
Sign in to view read count 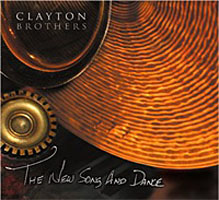 There was a time when jazz and dance were linked in the minds of the general public. As each evolved, this all changed: nobody was getting up to dance for bop—save, perhaps, Thelonious Monk cutting a rug mid-performance—and big bands focused on their music more than making a danceable product.

The literal act of dancing might have been removed from close association with this music, but a segment of the music never altered its dance-worthy DNA. Foot tap-inducing grooves still get people riled up at jazz clubs and, though they don't jump out of their seats to bust a move, their body language says they want to. This idea is at the core of The Clayton Brothers' The New Song And Dance, a dynamic set that's brimming with energy, soul and intelligence. While the brothers— bassist John Clayton and saxophonist Jeff Clayton—reference a wide cross-section of dance styles, break dancing to tango, they never play to stereotypes within these styles.

The brothers are both the face of the group and the major compositional forces behind the music, but all five musicians are marquee-worthy talents. Trumpeter Terell Stafford contributes fiery melodies in tandem with Jeff Clayton ("Smarty Pants Dants"); delivers solo work that's dripping with soul ("Cha Cha Charleston"); and plays nice on the material that calls for a more measured approach ("Terell's Song"). Gerald Clayton demonstrates incredible flexibility throughout, easily shifting from slick, understated accompanist ("Terell's Song") to fire-breathing soloist on "Battle Circle," a dark, pulsating nod to the pianist's break dancing past, and the album's most unique composition. Drummer Obed Calvaire might be the least well-known presence here, but he has quickly developed into one of the finest drumming forces of his generation, one who can play things fairly straight ("Chicago Bop Steppin"); deliver some second-line strut ("Street Dance"); dip his sticks into the rivers of Latin music ("Soul Tango"); or create grooves that are all his own ("Battle Circle").

While dance is the topic of the day, drama works its way into the music on the least dance-oriented track, Stevie Wonder's "They Won't Go When I Go." The artistic range of the brothers Clayton is on full display here, with Gerald providing super-sensitive support. John's classically influenced arco work sets the mood at both ends of the piece, while Jeff's alto flute builds on that idea. Jeff switches to alto saxophone mid-track, and the music reaches its apex with some molten saxophone maneuvers before becoming withdrawn and melancholy once again. A bit of a detour from the general vibe of the record, but its musical virtues merit inclusion and help to provide a better-rounded picture of the band.

While only two members in this group are blood brothers, all five men are brothers-in-arms, and the music on The New Song And Dance transcends both its titular art forms.