The Nu Band: Live In Paris 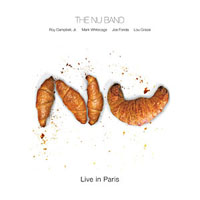 An average of one album every other year is pretty good going for a free jazz collective, and that's what The Nu Band has achieved. Its fifth, Live In Paris, comes ten years after their first communion in 2000. It's also a departure, not in that it is a concert recording as there are already three of those in the discography, but in that, for the first time, the quartet showcases its considerable talents at instant composition.

Reedman Mark Whitecage's résumé numbers two fine, though overlooked, examples on the CIMP label in Consensual Tension (1997) and Research On The Edge (1999), while trumpeter Roy Campbell is a past master of ensemble improvisation, exemplified by his participation in the feted Other Dimensions in Music. Nor are bassist Joe Fonda and drummer Lou Grassi strangers to such unfettered expression. Grassi's Po band regularly resorts to cooperative genesis, while Fonda has taken his infectious swing and tough tone off the map in his collaborations with Xu Fengxia and even the The Fonda/Stevens Group.

All this experience is put to astute use, guided by quick ears and an innate sense of what makes satisfying music. Look no further than the lengthy opener, "Somewhere Over the Seine," for an example. It starts with Whitecage's acerbic alto saxophone expostulating over a loose-limbed, free groove. Campbell's bravura trumpet gives way to a series of extemporized unisons between the two horns, a defining characteristic of this foursome. After Fonda's energetic arco solo, Campbell returns, pinched and mournful, on pocket trumpet, before heading, goosed by the reedman's alto, into another sprightly dialogue. Finally, a throbbing bass figure signals forward momentum into a playful conclusion.

The quartet explores some exciting territory on its journey. Although "Bolero Francaise" begins more dreamily, flugelhorn and chuckling alto eventually interweave, Whitecage inciting Campbell to ever greater heights. One of the highlights features the reedman in tandem with Grassi's rumbling drums, his sinuous lines sliding between pitches, culminating in a sequence of anguish-drenched cries, before trumpet intertwines for an anthemic finish. A compelling rendition of Grassi's "Avanti Galoppi" is the only chart—its bounding gait with a contrasting elegiac horn line offering an affectionate portrait of the drummer's sadly missed pet dog.

Confirmation of The Nu Band's ability to conjure form from thin air comes on the final "The Angle of Repose." Whitecage settles on a descending motif, which forms the backbone of a twinkling bounce, with both horn men wailing to a climax, eliciting enthusiastic applause for a set created with passion, and delivered without fuss.

Somewhere Over the Seine; Bolero Francaise; Avanti Galoppi; The Angle of Repose.