Harris Simon: The Mastery of Passion 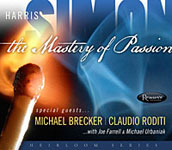 Discovering gold in reissues going 30 years back is always a pleasure. Such is the case with Harris Simon's The Mastery of Passion, featuring selections from CDs first released on Japan's Pony Canyon label—New York Connection (1978) and Swish (1980).

Standing out above the bunch is Brecker. This was during his early days, and he was already well on his way to jazz fame, having perfected his improvisational skills and assertive solo style. Another bonus is the chance to enjoy Roditi's emerging trumpet skills and Farrell's flute prowess.

Simon turns in fine work on piano and Fender Rhodes, and contributes four originals and sparkling arrangements. He creates in a wide variety of styles—'70s fusion, Brazilian, Afro-Cuban and Latin jazz. Violins also add considerably to several numbers. But, as Duke Ellington said, "it don't mean a thing if it ain't got that swing," and swing it does.

The music starts molto allegro with the fusion-infused, Latin-charged "Wind Chant"— vocal chorus and violins merging in wild abandon, drums pounding. Simon launches an electronic frenzy on Rhodes, but Brecker tows it all back into the mainstream with his tour-de-force solo. "Swish," on the other hand, is all the way straight-ahead, with the horn section charging forward in the midst of Simon's swirling piano. Brecker, as ever, stands out.

On the lovely "Midday Dreams," violins and piano are featured with bass and drums. Simon's solo is followed by Michal Urbaniak's tasty turn on violin. On the lyrical "City Light," Roditi's flugelhorn gets attention as he rides on a comfortable cushion of violins. He changes direction on "All Points South," where his searing trumpet, joins Brecker's scorching tenor—both emerging triumphant from the boiling rhythmic mash. Farrell gets time in the spotlight on flute in "Loufiana."

Denny Zeitlin's swinging "Stonehenge" is the album's major discovery unearthed, and greatly furthers the cause of fusion. All stops are out, with the horns coming on strong, caught up in the galloping rhythm, unrestrained guitars, and vocal abandon.

Looking back 30 years to his halcyon days, Simon says, "I still try to play with that level of commitment and passion that you hear on these early recordings." He is currently teaching at the College of William & Mary in Virginia and also continues to perform in trio and quartet settings. He can take pride in this achievement.